Where were you moments... 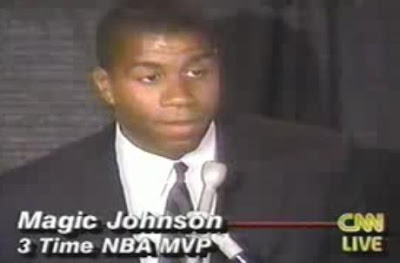 I'm not the kind that easily remembers "where were you" when an important date in history happens.  I can really only recall a handful of moments like that.  September 11th, 2001 was certainly one of those times.  This past Sunday evening I was reminded of another moment as I watched a special presentation on ESPN called: The Announcement.  It was November 8th, 1991 and I was a junior at Wright State University.  I was sitting on a couch in my apartment at Meadow Run when one of my three college roommates came through the door and said, "hey, did you hear Magic Johnson has AIDS?"  I remember being floored by the news with no prior hint that there was even an issue.  Of course I would later find out Magic didn't have AIDS, rather the HIV virus.

I'm not sure why I remember where I was at that moment.  I guess it was just the shock of knowing nothing, hearing the dreadful news and then staying glued to the TV looking for answers.  I suppose in 2012 I would probably hear about the rumor on Facebook, get the news alert from Twitter and watch the replay of the press conference on YouTube.  I wonder if I'll ever have anymore "where were you" moments.  I can't imagine saying, "I'll never forget. I was sitting at a ballgame when I got a tweet on my Droid."
No comments: 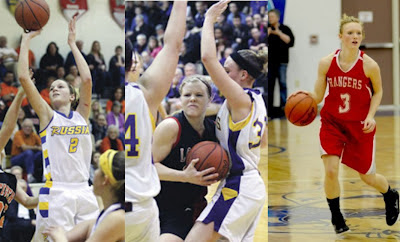 There will be a super sophomore show at the regional semis

You've heard of senior leadership on the basketball floor, right? It's typically an important part to being successful over the course of a long season, and it's usually key to making a run in the post season tournament. Well, that is if you have any seniors... Take for example the Russia Lady Raiders. Their current active roster doesn't include any seniors at all, yet the Raiders have advanced all the way to the regional tournament this Thursday night at 8pm at Tippecanoe High School. The floor general for the Raiders is the very talented sophomore Camille Puthoff. While it's customary for most 10th-graders to log minutes on the junior varsity team and prepare for varsity playing time next season, Camille has developed into a leader with "senior qualities". So how do the other coaches in the Shelby County League feel about her? They voted Camille to 2nd Team All-County along with two seniors and a couple juniors, proving she plays likes an upperclassman.

Russia goes into battle Thursday against Ft. Loramie, who by the way have a pretty decent sophomore themselves. Darian Rose was a huge factor in the Redskins state tournament run last year as a freshman on a senior dominated team. This year, as a sophomore, she's taken over the leadership role from those graduated seniors and is trying to direct her team back to Columbus. In the All-County voting Darian was selected as the only sophomore on 1st team along with three seniors and a junior. Her matchup with Camille and the Raiders Thursday evening should be fun to watch and remember as these two go at it for a couple more years.

Finally, as if those two super sophomores weren't enough, perhaps the best sophomore in the area will be playing in the opening game at Tippecanoe High School at 6:15pm. Midwest Athletic Conference player of the year Haley Horstman leads New Knoxville against Tri-Village. You can find Haley's name among the leaders in most offensive and defensive categories in the MAC. Most importantly though, she's lead New Knoxville to a 21-3 record. Haley has quite a challenge this Thursday taking on the Patriots lead by a super senior, Kayla Linkous, who has amassed over 2000 points in her career. Haley should get a lot of help from her teammate Paige Lehman though, who is New Knoxville's leading scorer.  Oh, by the way, Paige is a sophomore.