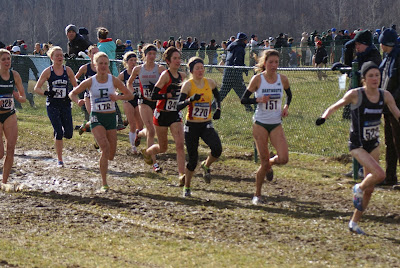 "Muddy. Wet. Cold. Awesome." That was the text message I sent to my friend, Ken, on Saturday from the NCAA Division I Cross Country Championships in Terre Haute, Indiana. Those were the course conditions of the day and they shouldn't have bothered anyone that was a die hard cross country fan. They certainly didn't bother anyone that was there to watch 2011 Russia High School graduate and Ohio State junior Katie Borchers.


I'd never been to the NCAA Cross Country Championships before. Come to think of it, I'd never been to any national championship before. The Lavern Gibson Course just east of Terre Haute is referred to as Cross Country Town, USA and now I understand why. It's quite simply everything a cross country course should be, beautifully designed and spectator friendly in so many ways. A $5.00 entry fee per person for a national championship event wasn't bad either. The 38 degree temperature made it cold, constant wind made it even colder, and standing water hidden beneath the grass everywhere made my 13-year old daughter, Anna, tell me she couldn't feel her toes. However, we quickly learned to appreciate our extra layers of clothing after seeing many of the collegiate runners dressed in not much more than swimsuits. The men's race kicked things off at noon and a freshman from Oregon thrilled the fans with a come from behind victory, but the real reason Anna and I came was the women's race at 1:15pm.

The Ohio State University had just one runner in Tette Haute representing the Buckeyes from their men and women's teams. Katie Borchers wore the scarlet and grey for a student body of over 50,000 back in Columbus. The previous week the OSU men and women's teams competed in the Great Lakes Regional Championships in Madison, Wisconsin and both teams missed out on qualifying for nationals. Katie, however, ran a great race and earned one of four individual qualifying spots. I thought to myself before Saturday's race, even if she finishes dead last it's quite an accomplishment for a girl from small town Russia. Fortunately, Katie doesn't think the same way I do.

My daughter and I ran from place to place on the course after the starting gun fired. "There's Katie!" and "what place is she in?" where about all Anna and I said to one another as we jumped over water and tip-toed through mud. My texting friend, Ken, was back home watching the race being broadcast on the internet. "Katie in 43" he texted after the halfway point. I learned from Katie's mom earlier in the day that the top forty finishers earned All-American honors. Not only was Katie running well, she was competing for All-American! Anna and I ran to the finish to watch the women come in. Somewhere between 20 and 30 I lost count. Here came another runner, and another, and another. Eventually there was Katie looking strong and passing one runner shortly before the finish line. Great finish regardless of whatever place she was in I told Anna. Then I received another text message from Ken..."40. Awesome". She did it! All-American!

Before Saturday's race the best finish ever for an Ohio State woman at the NCAA Championship was 73rd. Katie put her name in the record book and made a whole bunch of people back in Columbus and Russia awfully proud. She also set the bar really high for the next Lady Buckeye runner who comes along. On second thought, Katie's just a junior. Sounds like we'll be heading back to Terre Haute in 2014. Next time I'll pack warmer shoes for Anna. 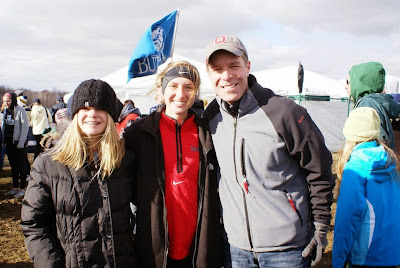 One year later and even greater...

It was exactly one year ago that I last spoke with members of the Liberty Center cross country team. I blogged about the Tigers here after they had just won their second consecutive Ohio High School D-III state championship. This past weekend at the 2013 state meet in Hebron the results were once again the same as Liberty Center had just captured another state title. For an added bonus, their #1 runner, junior Brittany Atkinson, returned to the top of the podium as the individual champion, a title she also won her freshman year.

I was anxious to talk to the team on Saturday because I knew their story. Six years ago the school almost didn't have cross country. The team consisted of just one girl that year. The next season current head coach Tim Atkinson took over and the sport is now flourishing. I chatted with two Liberty Center fans outside of National Trail Raceway on Saturday and asked how their program could go from rags to riches in such a short period of time? One gentleman said matter-of-factly, "It's because of Coach Atkinson. Don't let him fool you." He went on to explain that it's a common sight in Liberty Center to see the girls team out running at 6:00am on Friday mornings when most kids aren't even up for school yet. Cross country fever in the small town has even trickled down to 60 elementary kids who gather behind the school and run just for fun. Much like the fan said too, Coach Atkinson might fool you. When I met up with the coach after Saturday's race he deflected all the praise to his girls. I asked if he had anticipated his daughter Brittany's win that day, especially since she had finished 3rd at the regional meet the week before behind Coldwater's top two runners. The coach looked me right in the eye and said seriously, "Craig, she's such a gamer." I took that to mean Brittany runs her best when it matters most. She was certainly a gamer on Saturday. I also asked Coach what his thoughts were on the last race for his only senior, Paige Chamberlain, his second best runner that day and for most of the season. He beamed and described how much she's meant to their program. Coach Atkinson doesn't come across as the drill sergeant type you might expect from a three-time state champion, but perhaps that's what makes him so successful.

I was also glad to get a few words with Paige, the Tiger's lone senior, and I asked about the magic carpet ride she's been on for the last three years. Her smile explained most of what I wanted to know and although she'll miss her team and one of her best friends in Brittany, she couldn't think of a better way to end it. Finally, I caught up with Brittany, who has certainly secured her place in OHSAA state championship history as one of the best ever. With three team titles, two individual titles, and one individual runner-up, it's hard to find many others who have done as much. Did I mention she's still a junior? I asked Brittany about the individual battle early in the race with last year's state champ, Sarah Kanney of Coldwater. Brittany first acknowledged how good Sarah and her team were, then explained her strategy, talking about how she wanted get out faster than she did at the regional meet and how she threw a surge in at the mile mark to increase her lead even more. I also brought up the interesting fact that in the previous two seasons Coldwater had always beaten Liberty Center at the regional meet only to have Liberty Center beat Coldwater the following week at state. This year however, Liberty Center finally beat Coldwater at the regional and I wanted to know if that gave the Tigers confidence heading into state? Brittany said, if anything, it probably put a little more pressure on her team to win again. A quick check of history shows that Liberty Center does just fine being the underdog. In each of the past three seasons they've yet to be ranked #1 in the final state cross country coaches poll. Apparently the only coaches that matter to the Liberty Center runners are their own. Coach Atkinson will probably be just fine too if the Tiger's aren't ranked #1 again next year. He just needs a daughter who's a gamer! 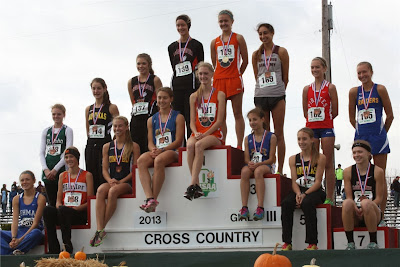