These Russia seniors had class... 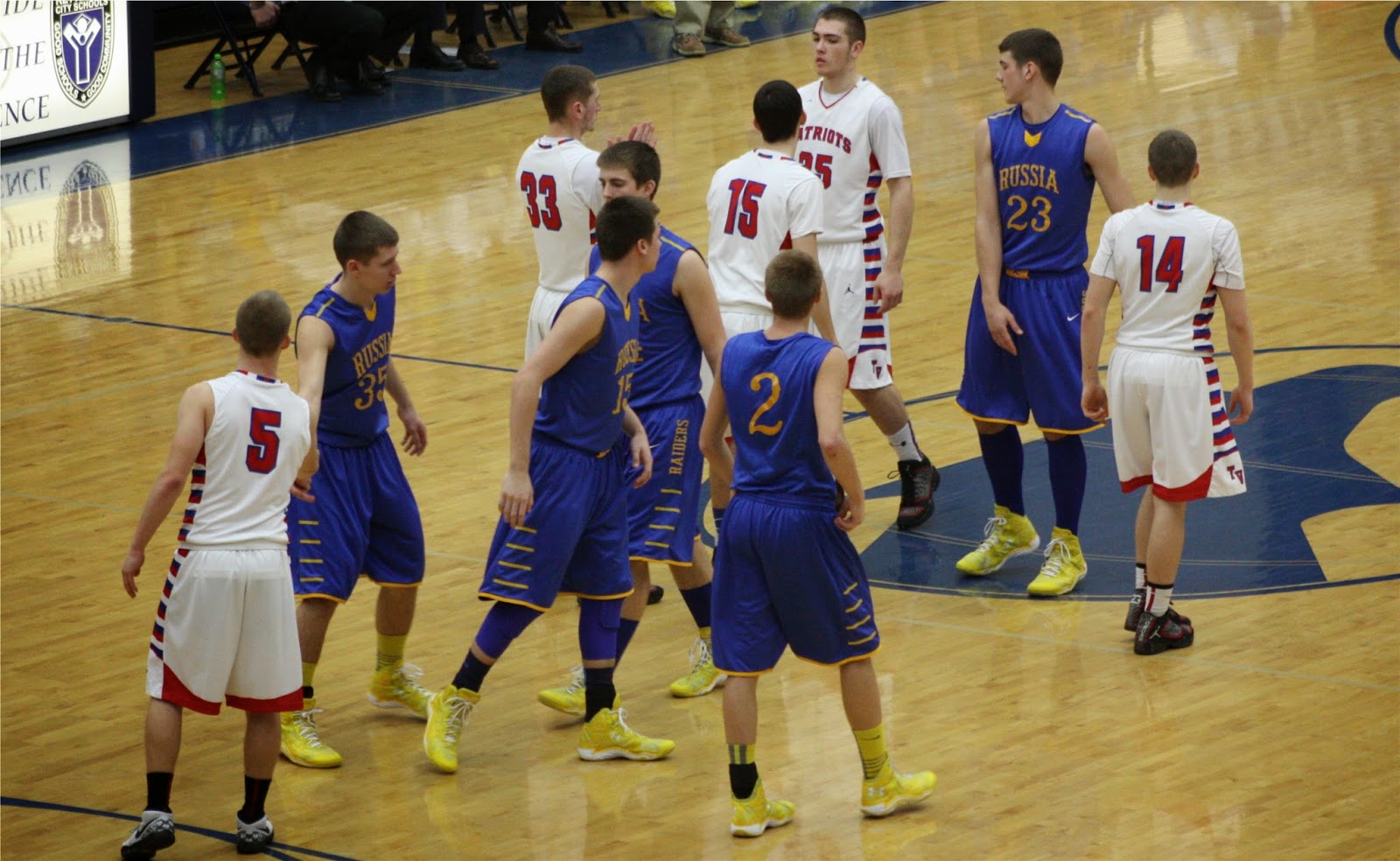 Russia played at Trent Arena twice this season. A rare opportunity
that came about because of exceptional talent and hard work

Ten Russia seniors wrapped up their basketball careers on the floor of Trent Arena Tuesday night, falling in the regional semifinals to Tri-Village 59-50. As the clock ticked down the final seconds, fans dressed in mostly gold stood up to applaud. Applaud the efforts of a hard fought battle and recognize a group of boys who put Russia hoops back in the regional spotlight again.

It was most of these same classmates that carried Russia to the regional tournament last year. Before 2014 it had been eight years since the Raiders last played in the regionals. That was back in 2006 when the venue was at Miami University and the Russia program was still riding the wave of annual success from the 2002 state runner-up team. What seems like yesterday for many faithful Raider fans was too long ago for most of the current seniors to remember.

Starting in junior high this special group of boys began to establish a reputation for winning. Capturing league titles in 7th and 8th-grade only fueled expectations for what was to come. As they entered high school the classmates that played together so well were split between the freshman, junior varsity and varsity teams. Then, as juniors, most of them reunited. It only took a short while to find that same chemistry they once enjoyed and the boys put together a 22-5 season, including a tournament run that brought home a district title over talented Cincinnati Aiken. The 2014 season eventually ended against Marion Local in the regional semifinals, but the taste of success only increased their appetite for their final year together. 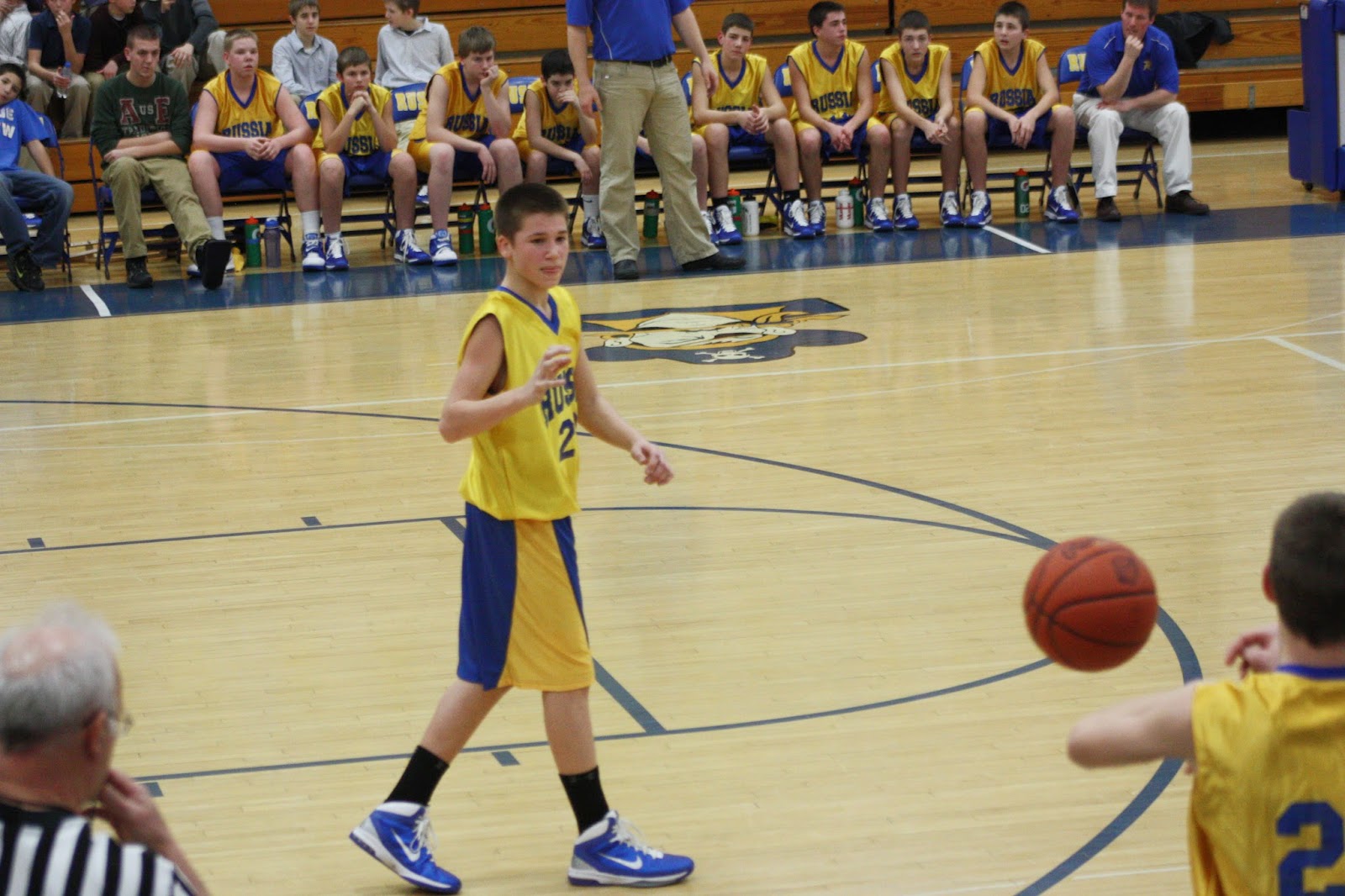 Nolan Francis was a floor leader for the Raiders in junior high.
In high school he led Russia in scoring with over 1000 points

To say this last season of basketball for ten friends has been enjoyable would be a huge understatement. Another 22-5 season, titles in the SCAL, sectional tournament and one more district championship over Cincinnati Aiken this year was just part of the fun. Winning the Piqua holiday tournament and playing at Flyin' To The Hoop were moments that Raider fans may never experience again. Those ten seniors and Russia followers got to enjoy the fruit of six years in the making. Most of all though, this group did everything the right way. Great sportsmanship, hard work and starting the next wave of success for Raider basketball will be what they are remembered for. The boys may not have achieved everything they hoped for, but they were a class with class. And that's something to be proud of. 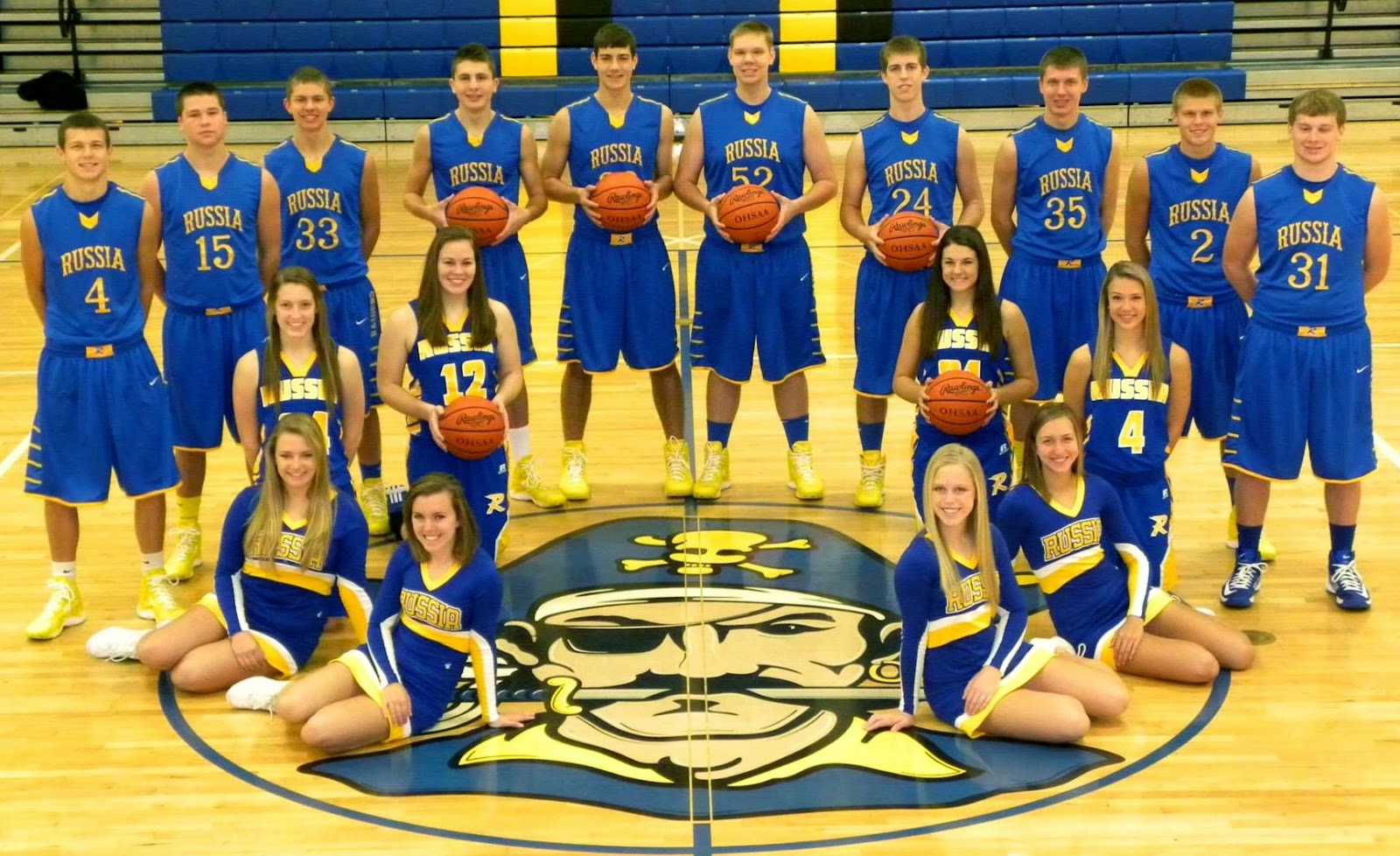 The 2015 seniors joined the class of 1995 as the only two teams
in school history to win district titles in both boys and girls
basketball in the same season. Quite an accomplishment

Jared Hoying doing all he can do... 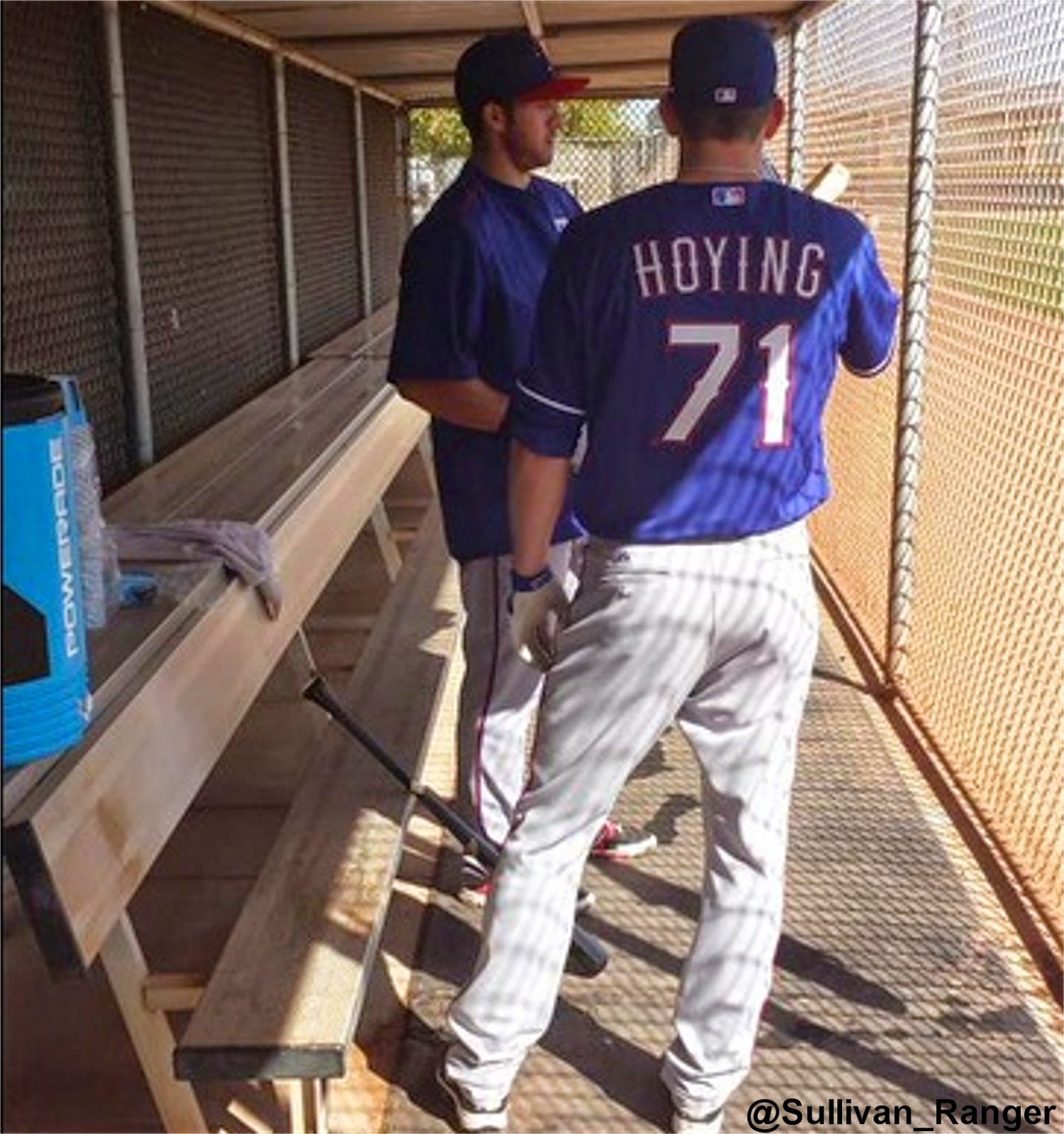 Jared Hoying's production through one week of Spring Training

Jared Hoying is doing all he can do to prove he deserves on the Texas Rangers major league roster when the regular season starts the beginning of April. Last year the Ft. Loramie product spent his entire season at Triple-A Round Rock and this year he is making the most of his first-ever invitation to big league camp. In the first six games of Rangers spring training the center fielder has played in five of those games and hammered out the line above. In doing so, #71 has garnered the attention of several baseball columnists and sports bloggers. 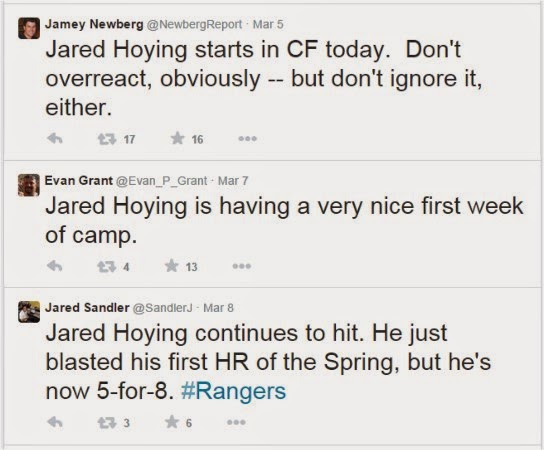 The media guys have noticed Jared's arrival at camp

Most fans back in west central Ohio are wondering though, how much attention he's getting from the Rangers organization. Last season at Round Rock, Jared batted .271 with 26 homeruns and 78 RBI. That kind of production is what landed him in the Triple-A all-star game and obviously what merited his invitation this spring with the big boys. Texas Rangers minor league guru for the Newberg Report, Scott Lucas, speculated on Twitter that the reason Jared isn't already ensconced as the 4th or 5th outfielder for the Rangers is due to his .318 on-base percentage (OBP) at the minor league level. No doubt fans back home will point to Jared's .500 OBP so far this spring training. Lucas further tweeted that if Rangers outfield prospect Delino DeShields (who was the lone player Texas selected in the Rule 5 draft back in December) doesn't pan out, Jared is an option for backup outfielder due to his defense, power and speed. So far this spring DeShields is 1-for-9 in five games with a triple and a .200 OBP.

If Jared continues to produce as he has this past week, heads of the organization will have to take notice. Texas finished 2014 with the American League's worst record at 67-95 and used a major league record of 64 players during the season. In order for the Rangers to enjoy any type of success similar to their 2010 and 2011 World Series teams, they need stability. And a 25-year old power-hitter that swings from the left side of the plate just like Texas star Prince Fielder would be a good start.

Kudos to these sports people...

I blogged about a similar thing last Friday and it was so much fun, I figured I'd do it again. This Friday I thought I'd give kudos to a few people that impressed me in local sports this past week (kudos means praise for exceptional achievement, by the way)...

Stats Man
If you follow @Fish_Report on Twitter, you probably noticed I tweeted out some complete box scores on several girls and boys tournament games this past week. When I say complete, I mean play-by-play with every statistic imaginable. Don't give me the credit, it's all the hard work of Russia alum Matt Zircher, seated on press row with his laptop and printer. Matt has been a stats man his whole life. His full-time job is the Associate Director of Athletic Communications at Wright State University, but in his spare time he does things like write for the Sidney Daily News, he works part-time as official scorer for the Dayton Dragons, and he also donates his time every year at his hometown Russia Alumni Softball Tournament to take care of everything from the official book to running the scoreboard. Matt is a very generous person and was doing a service at the sectional tournaments last week that media people typically don't see until the state tournament. Kudos to Matt.

Best in the MAC
Last week I gave my opinion on the All-MAC girls honorees. This week the All-MAC boys came out and what a decision Player of the Year had to be. I can just see the coaches of the Midwest Athletic Conference shaking their heads thinking, "do we give it to the kid that's heading to Michigan State to play for Tom Izzo or the other kid that's going to Dayton to play for Archie Miller?" In the end the coaches chose future Flyer Ryan Mikesell of St. Henry over future Spartan Kyle Ahrens of Versailles. I'm pretty positive it had nothing to do with one being more talented than the other since both are extremely gifted. Rather, St. Henry simply won the conference championship and the head-to-head matchup this year. I was also glad to see the coaches didn't take the easy way out and just announce Ryan and Kyle were co-winners. Kudos to Ryan Mikesell on probably the toughest vote in MAC history.

Ryan Mikesell ramming one home against Russia earlier this year

Luke in the Limelight
Ohio's Mr. Basketball, Luke Kennard, started down the tournament trail on the right foot so far (or maybe that should be left foot since the sharpshooter is lefthanded?). Franklin, a D-II #1-seed, easily beat a couple opponents in the early rounds of the sectional tournament. The Wildcats now face Ponitz from the Dayton City League in the sectional championship at UD Arena on Saturday night at 7:30 pm. Franklin has been beat at this exact point in tournament the last three consecutive years. The Wildcats lost to Thurgood Marshall last year, Dunbar in 2013 and Thurgood again in 2012. The only thing that's for sure is fans will be lined up outside UD Arena for perhaps one last chance to see Luke in a high school uniform. I really hope Franklin wins this game. For no other reason than I enjoy reading about the hysteria of Luke Kennard. Kudos to Luke for everything he's accomplished so far. 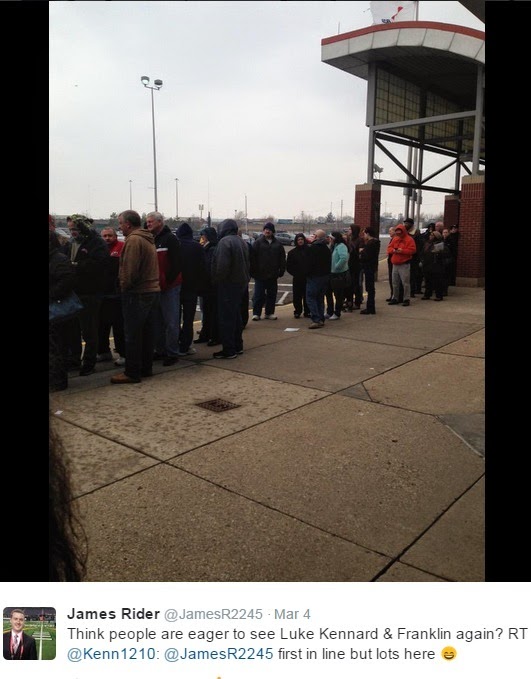 
Future Hall of Famers
Indoor collegiate track doesn't typically dominate the headlines of the sport pages, but a couple local track stars are dominating at the Division-I universities they represent. Former Tri-Village running star Clayton Murphy is just a sophomore for the University of Akron, but this past weekend he was awarded as the Outstanding Track Athlete of the Meet at the Mid-American Conference Championships. Clayton led Akron to a MAC title winning both the 800 and 1600. Afterward, he was just one of just 16 selected to compete in the 800 at the NCAA National Championships coming up next weekend in Arkansas. On the girls side, Russia alum Katie Borchers continues to carve out history as a senior at The Ohio State University. Katie's Buckeyes also won an indoor title last weekend in the Big Ten and Katie was a significant part of that, winning the 800 and breaking her own school record in the process. Katie, like Clayton, was also just one of 16 selected to compete in the 800 next weekend at Nationals. I'll say it now... both will be future Hall of Famers at their respective universities some day. Kudos to Clayton and Katie. 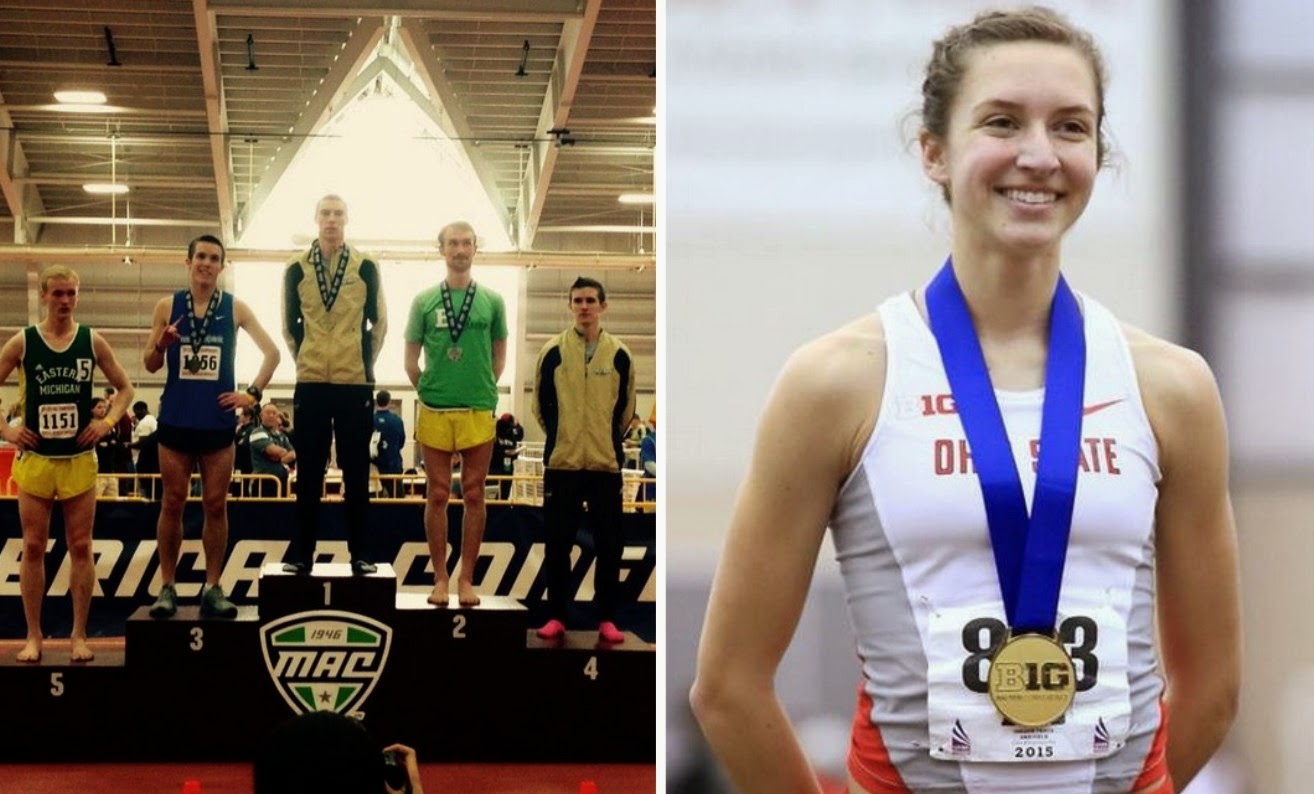