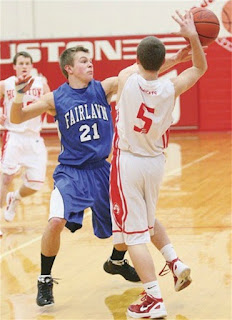 Fairlawn's Gillem is averaging 23 ppg with a
taped shooting hand. (Photo: Todd Acker)
One of the comments I've heard several times since the Piqua sectional tournament draw a couple weekends ago, is how easy the bracket will be for the Jackson Center Tigers.  According to these basketball folks we might as well just put the #1 team in the state into the regional tournament because no one is going to challenge the Tigers until then anyway.  Isn't this why we play the game?  I believe 20-0 Jackson Center can be challenged in Piqua and I'm fairly certain that challenge will come from the 6-14 Fairlawn Jets.  Laugh if you must, but let me give you some things to consider in the days leading up to the start of tournament play this weekend...

I watched Fairlawn win their last regular season game of the year on Friday night against Russia.  Leading scorer Anthony Gillem had his shooting hand wrapped from a broken wrist injury earlier this season, but never mind that.  The kid still scored 23 and has good range from around 25 feet.  I saw him stretching that wrist a few times during dead balls, so it's a little scary to think he's not even 100% healed yet.  This week off should help.  By the way, in the four games since he's been back from the injury he's averaging an even 23 ppg.  Gillem's sidekick is Trey Everett, a really good guard who can dribble, drive and shoot.  He can also electrify the Fairlawn crowd with a rim-shaking dunk just like he did against the Raiders on Friday night.  Those two guards together remind me of another duo Fairlawn used to have named Andy Francis and Richie Beard.  If you remember, the Francis & Beard show took Fairlawn to the regional tournament with a supporting cast pretty similar to Gillem & Everett.  Wells, Cummings and Hughes know their rolls for the Jets and it worked well against Russia.

Don't pay any attention to Fairlawn's #7 seed.  They play the #6 seed Mechanicsburg Indians on Saturday, a team they just beat on the road two weeks ago 61-58.  Waiting for the winner is #8 Riverside, who also lost to Fairlawn in OT back in early January when Gillem was out with the broken wrist.  I predict those first two games will be close, exciting and Fairlawn will prevail.  That puts the Jets in the sectional final game against Jackson Center who will roll over Mississinawa Valley and Bradford to get there.  My question is how ready will Jackson Center be for the high-flying Jets?  The Tigers played with a target on their back the entire month of February.  They obviously handle pressure very well and stayed sharp when every team gave their best shot.  Keeping the Jackson Center kids up for the first two rounds will be a challenge for Coach Elchert.  I wouldn't bet against the Tigers in the sectional finals come March 3rd, but I would bet there could be some March Madness in the air!
No comments:

A night for music fans... 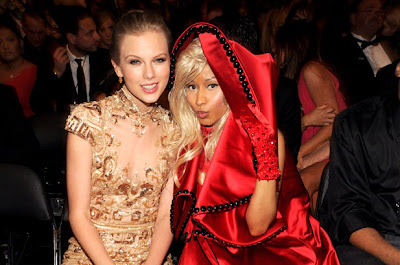 The 2012 Grammy's was both spectacular and bizarre

Just like I do every year, I was really looking forward to watching the Grammy Awards last Sunday evening. I love all types of music and it's one of those nights you get a little bit of everything. Before I even start blogging about the performers though, let me just say the invention of HDTV has made this awards show spectacular. Hi-Def makes a lot of live TV shows look awesome and the Grammy's is certainly one of them. Throw in some surround sound and you're basically in the front row. I'm going to recognize some of the performances that stood out for me, both good and bad, and give each a grade, so here we go:

Bruce Springsteen - I wasn't familiar with his new single "We Take Care Of Our Own", but I thought this was the perfect start to the Grammy's. I was worried the entire telecast was going to be somber with the passing of Whitney Houston and this upbeat beginning shouted a message that the show must go on! B+

Bruno Mars - I love his voice and his song "Runaway Baby" was an awesome 60's sounding number that made me want to go buy his CD. A

Chris Brown - I wasn't a fan of this guy before his performance and I'm still not. He sang "Turn Up The Music/Beautiful People" and I wondered if he was lip syncing due to all the jumping around he was doing. I'll give him the benefit of my doubt, but I thought it was too much dancing and too little singing. F

Jason Aldean & Kelly Clarkson - Country is my favorite genre and I like their song "Don't You Wanna Stay", but this performance didn't do anything for me. Jason's mic going dead at the end didn't help either. C+

Rihanna - Love this pop singer and about everything she sings. "We Found Love" is on my playlist right now and she did a good job with it Sunday night. B

Cold Play & Rihanna - I don't listen to Cold Play much, but every time I hear them perform I always think I should probably get tickets to one of their concerts someday. "Princess of China" was really cool with all the crowd wearing thosing glowing bracelets...and Rihanna helped too. B+

Maroon 5, Foster The People & The Beach Boys - I liked this mainly because I just like hearing Adam Levine and Mark Foster hit the high notes in those classic Beach Boys songs. Some of those Beach Boys didn't look real thrilled to be there. B-

Taylor Swift - One of my favorite country acts and she didn't disappoint. Taylor sang her hit "Mean" and seemed to aim it at all the bashers out there that bang on her voice. She even changed up one of her verses at the end saying "some day I'll be singing this at the Grammy's". Let em bash away Taylor! A

Katy Perry - Really cool intro starting with "E.T." and then went into "Part of Me". Rumor was that second song was directed at her ex. Didn't love it, didn't hate it. C


Adele - This was the one I was looking forward to. Adele sang "Rolling in the Deep" and it was the best performance of the night. After just returning from vocal cord surgery I kept waiting for her voice to crack, but it never did. I only wish she would have added "Someone Like You" as an encore. A+

Nicki Manaj - I like Nicki Manaj. That was bizarre. F

Jennifer Hudson - If anyone was to sing a tribute to Whitney Houston this was the girl. Beautiful rendition of "I Will Always Love You". One of those goose bump moments. A
No comments: 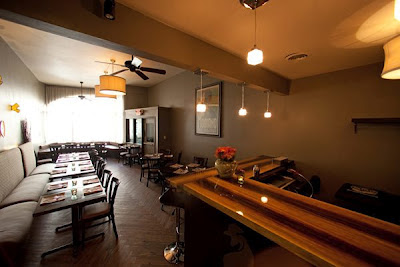 Roost Modern Italian isn't big inside, but the taste it!

Sports
- The baseball camp at Russia this past Sunday and this coming Sunday has an amazing group of instructors.  Current pros from the Nationals, Rangers, Diamondbacks and Blue Jays are teaching these little league players big league stuff.
- 7th-grade girls SCL basketball championship this past Monday, #4 Russia vs. #1 Fairlawn.  I know what you're thinking, but believe me, it was pure junior high craziness watching some future stars battle it out with Russia winning 29-26.

Songs
- Run by Matt Nathanson with Sugarland.  Not sure what genre this is, but it's on my playlist right now.
- Sherry by Frankie Valli & The Four Seasons.  Jersey Boys do a pretty good imitation.
- I'm Having a Good Day by Karli Whetstone.  An Ohio girl with some good stuff.

Food
- Mushroom ravioli on spinach from Roost Modern Italian at the Oregon District in Dayton.  Big taste in a very small restaurant.

On the Web
- LeBron James and Blake Griffin take a back seat to this Russia Dunker
- Fit to Fat in Five Hours.  A humorous look at those before and after exercise pics.
No comments: