Pope’s Visit to the United States 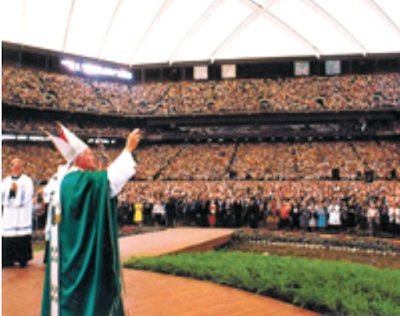 Pope John Paul II celebrates mass at the Pontiac Silverdome
near Detroit in 1987 in front of 100,000 attendees

Pope Francis' visit to the US brought back memories of a long ago visit by a Pope to this country back in 1987. John Paul II came to Detroit and celebrated a mass at the Pontiac Silverdome, the home field of the Detroit Lions at the time. Thanks to a neighbor who was able to provide five tickets, my parents and in-laws traveled up from midwestern Ohio for the Mass. My wife joined them along with about 100,000 other faithful. Click on this link for more photos of the mass. I stayed at home to babysit our young son and to watch the mass on TV. Afterwards, my Mom, of deep religious belief, said attending the mass celebrated by the Pope and to see him in person was the most glorious event of her entire life. She even said at the time Pope John Paul II will be a saint someday, which occurred earlier this year along with her other favorite pope, John XXIII. To this day, my siblings still claim arranging for our parents to attend the Pope’s Silverdome Mass elevated me to “favorite son” status for life. And it didn’t hurt my standings with my in-laws either. (PS: See what the Pontiac Silverdome looks like now)
No comments:

This is a guest blog by an anonymous Fish Report reader as part of a series of periodic posts that will focus on fond memories of growing up in Midwestern Ohio during the 50’s & 60’s. 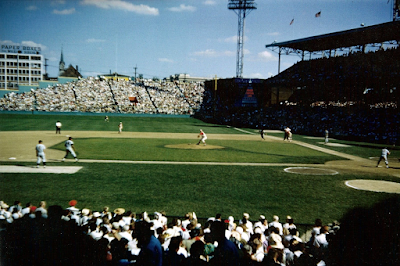 This well written article by Sonny Fulks in PressPros Magazine about meeting Wally Post back in 1962 brought back similar memories for me. It was three years later in 1967 that I took my 9 year old brother for his birthday to a Redlegs game at old Crosley Field (in 1953, the Reds were renamed Redlegs to avoid any association with communism and the USSR). Coincidently, it was Johnny Bench’s rookie season. We arrived early and went to our seats in the right field bleachers shown on the photo. Notice the elevated terrace (darker shaded grass) instead of the conventional warning track. Pete Rose was taking batting practice and Bench was shagging flies with his catchers mitt in right field on the terrace just in front of the bleachers. We yelled down to Johnny for a ball and at that moment, Rose hit a line drive right at Bench, who perfectly deflected the ball off the heal of his catcher mitt right over the fence into my hands. So naturally I handed the ball to my brother for his birthday.

Fast forward 20 years, my employer, Ford Motor Company, hired Johnny Bench to do a series of car ads and fortunately I had an opportunity to meet him, so I contacted my brother in advance to have him send the ball so I could share the story with Johnny and ask him to autograph it. My brother said that was impossible because he and a neighbor boy were playing ball years earlier and had used the Bench ball after losing their first ball in the cornfield. Needless to say, they also lost that keepsake ball in the cornfield! Here’s what I told my brother, “You &%#@ ?^%~$#”.
No comments:

This is a guest blog by an anonymous Fish Report reader as part of a series of periodic posts that will focus on fond memories of growing up in Midwestern Ohio during the 50’s & 60’s. 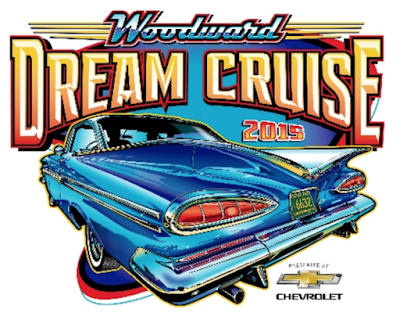 Attended the Woodward Dream Cruise this summer in Detroit and discovered the logo for this year’s event was a blue and white 1959 Chevy, just like my first ride at age 16 that was a hand-me-down from my Dad after he bought a new car. First step to transform the old car was to add white walls, but without having to buy new tires by using an insert over the tire that looked just like the real thing and at a fraction of the cost. Next were some moon hubcaps, a thrush muffler, a floor shifter (3 speed but with a 4 speed knob!) and a wax job that made the car a real classic-to-be great for cruising. Those horizontal tail fins were special!

This early love of automobiles lead to an engineering degree from General Motors Institute, 6 years working for GM in Dayton, followed by 27 years with Ford in Dearborn before retiring in 2000. Over those years working on and driving cars became a passion that still exists today. After the ’59 Chevy, I drove a red ’62 Chevy, a gold ’69 Nova SS, a white ’63 split window Corvette, a blue ’68 Corvette, a yellow ’68 Mustang, a ’65 brown Corvette convertible, a white ’77 Thunderbird (remember driving it to Loramie’s basketball state championship win that spring), a maroon ’59 Jaguar, a red ’84 turbo Tbird and a merlot ’04 Tbird, just to name a few! My favorite was the ’65 Corvette. This vehicle came into my hands after my brother-in-law married my wife’s sister and she wanted new furniture. So the Vette had to go, but on the condition that he could someday buy it back from me at the going rate. Whenever my brother-in-law and his family visited, he always gave his kids rides in the Corvette, but when it came time to give his wife a ride, for some reason the car wouldn’t start! Somehow it knew!  Fast forward about 20 years, after babying that car for all that time, I received a call from my brother-in-law about a week before the Dream Cruise that he was ready to buy back the ‘65. Sad day for me; happy day for him! He still has the Vette and cruises around Russia, OH, but now with his grandkids. And the tables have turned, as I now check it out when visiting him, and it always starts! 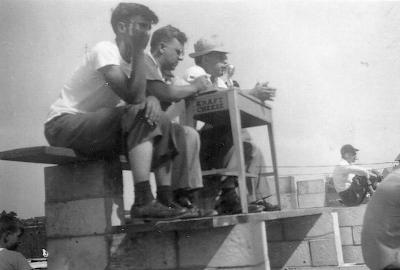 Many years before Fish Report Live’s Craig Fiessinger and Ken Francis were the voice for local sports in midwestern Ohio, there were two brothers from Ft. Loramie who were also avid sports fans. They announced and kept score at local sporting events as shown in this photo of the brothers, Bill (Bus) and Joe Borchers (center & right). The two brothers also ran their family grocery, appropriately named Borchers Store. All their customers would get the latest local sporting news from them, sort of like the services Fish Report so effectively provides. I distinctly recall buying bubble gum baseball cards at the store, opening them up and one of the brothers undoubtedly would share a story about the players in the package.

The photo of the Borchers brothers at a 1947 Loramie baseball game was possibly taken by my uncle, who was about 22 at the time, was in college after serving in the Navy during WWII. He loved baseball and photography. A few years later after graduating from college, my uncle got married, landed a job with John Deere, and was transferred all over the world during his career, including a stint in Corning, NY. Fast forward 68 years and the photo landed on eBay for sale by someone in Corning, NY. No doubt my uncle and his family, before one of their moves, had a garage sale to get rid of some stuff, including a bunch of old photos, because the NY eBay seller was offering a batch of other Loramie area photos, mostly of Lake Loramie and the campgrounds. Anyway, I routinely search for items on eBay related to local communities around where I grew up and found this photo offered on-line. Since I recognized the two brothers, the eBay offering was forwarded to one of the brothers’ daughters, with whom I went to high school. She ended up winning the eBay auction for the photo and also graciously provided a print for me. So this blog is in honor of the Borchers brothers, who provided such a positive influence on local sports back in the day just as Fish Report does today. (Does anybody know the others in the photo including the kid who looks like Beaver Cleaver behind the bleachers – he’d be about 80 today?)
No comments: 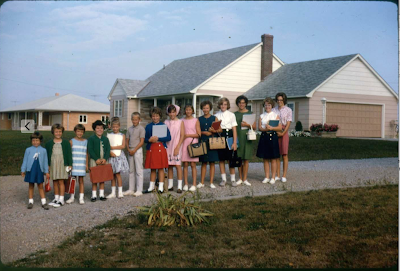 
Growing up, we had several cousins who lived in the small town of Russia nested between Versailles and Houston. Every Labor Day weekend, our family would make the trek to visit our cousins during the Russia Homecoming (a.k.a. Russia World’s Fair), which was always a blast. But this annual event signaled summer was over and the school year would begin in earnest. Some 50 years ago, this group of Russia students from a neighborhood just east of town were waiting in line for the school bus, when the mother of the youngest took this photo on her daughter’s first day of school in 1965, fifty years ago. Of the fourteen kids, only one was a boy, John Francis, who was really happy when a kid nicknamed Frog eventually moved into the neighborhood! 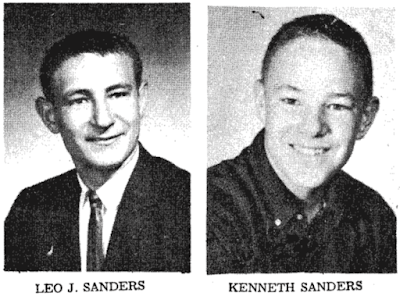 50 years ago changed lives for many, including me


With summer coming to a close, growing up in the 50’s & 60’s offered the best summers ever, with the warm weather, pick-up baseball games, swimming in the lake, visiting cousins, running through the grass barefoot; just having lots of fun and not having a care in the world. Those times came crashing to screeching halt during the summer of 1965, between our junior and senior years in high school, when one of my best friends Ken Sanders and his older brother Leo drowned in a local gravel pit while fishing on a summer Sunday morning 50 years ago. Here’s the Minster Post article on their deaths. Just the night before, a bunch of us including Ken were cruising around together having the time of our lives, a much too short life in his case. I was in church that Sunday morning at 10 AM services when all the sirens started to blow, then shortly afterwards, someone came into church to escort Ken and Leo's parents outside and notify them about the terrible accident. His parents were sitting just a few pews ahead of me. As everyone was leaving church, the sad news was relayed quickly among the crowd. Ken was the closest person to die up to that point in my life, so it hit me very hard and still does. There isn’t a day goes by that I don’t think about him; what might have been, who he would have married, what he would be doing now, how many grandkids might he have, where he’d be living.

Needless to say, the Sanders family, our classmates and the entire town were devastated. Lines were a block long at the funeral home to pay respects and say a prayer for the two brothers. Several of us to-be Seniors were pall bearers at the double funeral, after which our entire class of 37 met up at Louis’s (now Scudzy's) bar in Newport, one of our stops the night before. Needless to say, we shared stories and many toasts in Ken’s memory. Furthermore, soon afterwards when school restarted for our senior year, it came time to elect class officers, and I was asked to nominate Ken as honorary Senior Class president, which I did and he was unanimously elected posthumously. May he and his brother rest in peace.