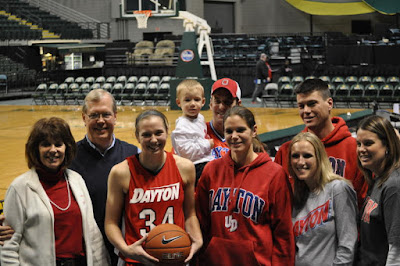 Fish Report recently chatted with Versailles alum and University of Dayton senior basketball player Justine Raterman! Justine is having an outstanding career with the Flyers and was honored back in October by being named to the Wooden Award Preseason Top 30, which is college basketball's most prestigious honor! We asked Justine about her college career, as well as her playing days at Versailles. Check out what she had to say!

F.R. Thanks for joining us on Fish Report Justine! Wow, you're halfway through your senior year! How does this year compare to your first three at Dayton?
J.R. This being my final year at Dayton I am really trying to enjoy moment. Whether it be traveling, playing, or spend time with my teammates, I recognize that this is my last couple months to be a part of something this special. On the court, I have grown every year as a leader and now being a senior I take that role with even more responsibilty. I am working hard to make this the best year of my basketball career.

F.R. What are your plans for life after basketball?
J.R. Basketball has always been a huge part of my life and it always will be. I hope to continue to playing after I graduate from UD and kind of go where the wind takes me. As for a career, I am interesting in coaching, using my math degree, or working in academics at a collegiate level. I am obviously not sure what I want to do yet, but I just hope to find something I love where I am happy and can help others as well.

F.R. Does your older sister Jacki, the coach of the Versailles Lady Tigers basketball team, ever try to tell you what you're doing wrong on the basketball court?
J.R. This question makes me laugh. Anyone that knows my family knows that we are a family full of coaches. I definitly have plenty of people to let me know what I need to improve on after every game. Some might think this would drive me nuts, but I love it. Even those days when I really don't want to hear it, I know that they come from a good place and I remember how blessed I am to have them in my life. Their support means the world to me.

F.R. Speaking of Versailles, take us back to your high school playing days and tell us one of your favorite memories with the Tigers.
J.R. High school basketball was jam-packed full of amazing memories for me. As many would probably guess, one of my favorite memories was winning state my senior year. It is something I will never forget. However, some of the most important memories are the random times I got to spend with teammates. Whether we were playing games that made us laugh until we were crying our eyes out, entertaining ourselves while being trapped in the blizzard of '08, or getting yelled at by Coach for not wearing kneepads, those girls made my high school experience unforgetable and I cannot thank them enough!

F.R. Final question. Can you give the younger basketball players back home some advice on what it takes to succeed and maybe play college basketball someday?
J.R. College basketball is a lot of hard work, and as most have probably heard, that hard work starts early. Many people have probably told young basketball players that they have to put the extra work in during the summer or off season and after practice and that they have to work harder than everyone else and make sacrifices. This is 100% true. One thing I have learned through the years though is to always remember to have fun. Basketball is supposed to be enjoyable; it is a game! So through all of your hard work and extra workouts, remember why you play and why you love the game. Everything will fall into place after that!

Great stuff Justine! Good luck the rest of this season and Go Flyers!
No comments:

At Fish Report we love history.  We post stories about history, we archive pictures and video to look back on history, and we hope that the interesting interviews we do on this blog will be preserved for future generations to read about.  Looking back on the year 2011, we picked our five favorite events that were reported on by us and we feel were a part of local history... 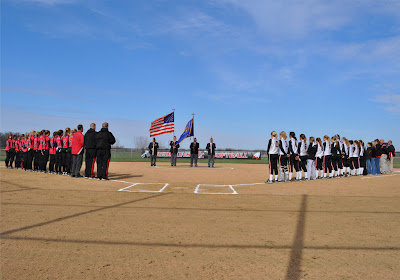 Ft. Loramie opened a new softball field in March with a game against Coldwater.  The Redskin's Denise Marchal became a part of history throwing the first pitch and teammate Macy Turner went in the record books for hitting the first home run.  Ft. Loramie won their inaugural game at the new diamond that will be used for generations to come. 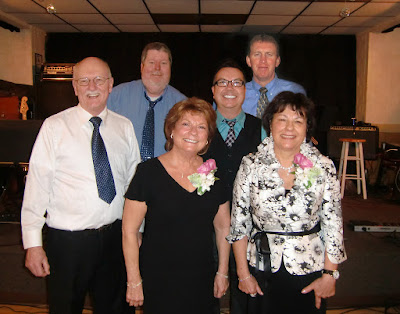 For over a half century, parents and children in Shelby, Auglaize, Darke and Mercer counties danced to the music of the DeMange Band.  Fourteen siblings played in the band at one time or another starting in 1959.  Now ages 48 to 70, the group decided to play their final show at a Minster Civic Association dance in April. In June, two high school alums from the Midwest Athletic Conference played in a Major League Baseball series against one another.  Marion Local alum and San Diego Padres pitcher Cory Luebke hosted the Washington Nationals and their pitcher Versailles alum Craig Stammen.  Both pitched in relief appearances on different nights and combined for 2.1 innings allowing 0 runs.  It was the only time they would meet all season. 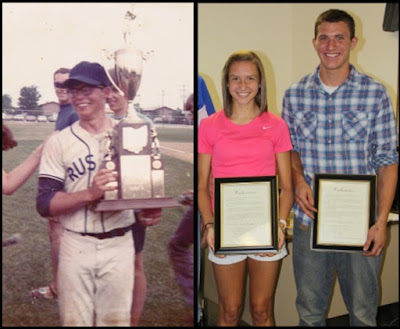 Russia celebrated the 40th anniversary of their 1971 state baseball championship at a ceremony during the basketball season early in the year.  It was the only state championship of any kind that Russia had ever won.  Then in June, Russia senior Luke Pohlman captured the individual D-III state track championship in the 1600 meter run.  Classmate Katie Borchers followed up shortly afterward with another individual state title of her own in the 800 meter run. 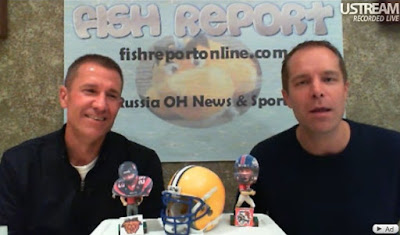 Perhaps the first live show to ever be broadcast in Russia debuted in November with the airing of Fish Report LIVE!  Hosts Craig Fiessinger and Ken Francis talked about local high school sports to a live internet audience of 13 people.  Reruns of the pilot episode were eventually watched by over 600 viewers.  Maybe we're a little biased, but it was arguably a moment for the record books.

Meeting one of Ohio's best runners... 
It's no secret that I'm a fan of high school cross country.  I've blogged about it on these pages before and I imagine some of the Fish Report readers get enough of the 'over-coverage' I give it on the website during the fall season.  I've officially moved on to high school basketball now and I'm enjoying the start of an exciting season for both the boys and the girls.  However, this past weekend presented me the chance to blog about one more cross country story before 2011 is over.

Thanks to my neighbor (and Fish Report LIVE! co-host) I had the opportunity on Saturday to meet one of next years top returning D-III girls runners in the state of Ohio.  West Liberty-Salem junior standout Meghan Vogel was in Russia with her parents to visit Russia junior standout Lauren Francis and her parents.  Meghan individually finished 6th at the state meet a little over a month ago and led her junior class dominated team to a 3rd place finish overall.  Meghan's mother, Ann, is the coach of the Big Orange and her father, Jason, is her biggest fan.  The trio came to Russia for the first time Saturday night with some map guidance from their GPS.  Once they found our village, they attended the Russia-Minster boys basketball game and Meghan had the good fortune of sitting in the Raiders rowdy student section.  During halftime of the varsity game I was walking by the student section when I recognized Meghan and she appeared to recognize me as well.  I shook Meghan's hand and asked her if she knew who I was.  She said, "you're the guy from Fish Report, right?"  I had to smile as I'm not sure I've ever been identified that way.  I told Meghan I would catch up with her and her parents after the game and I was looking forward it.

Later that evening, after the Raiders victory, I did catch up with the Vogel's and we talked about everything from running to work to food to religion.  Meghan, Ann and Jason have a lot in common with us Russia folks, including a freshman brother and son that attends the University of Dayton.  I would also like to add that Jason is a pretty fair ping pong player, as I witnessed him giving quite a game to a Russia basketball player that is pretty good himself.  I did my personal best to convince the Vogel's how well they would fit into our community, particularly our cross country program, but I understand they have plans of their own back in West Liberty.  Oh well, I tried.  It was a real pleasure spending time with them and of course talking running.  My neighbor and I even managed to invite ourselves to West Liberty next summer to run the hills around Ohio Caverns with Meghan, Lauren and anyone willing.  I'm not suggesting we can keep pace with a couple of the best runners in Ohio, but perhaps we can say we did for a few minutes.

So, my blogging about cross country in 2011 has finally come to an end and I'm thrilled I was able to get one more post in before the year is over.  In 2012 you can bet Fish Report will 'over-cover' high school cross country again.  We'll follow the Russia Raiders and all our favorite area teams...and yes, that now includes the Big Orange from West Liberty-Salem!
No comments: