A tale of basketball in Shelby County 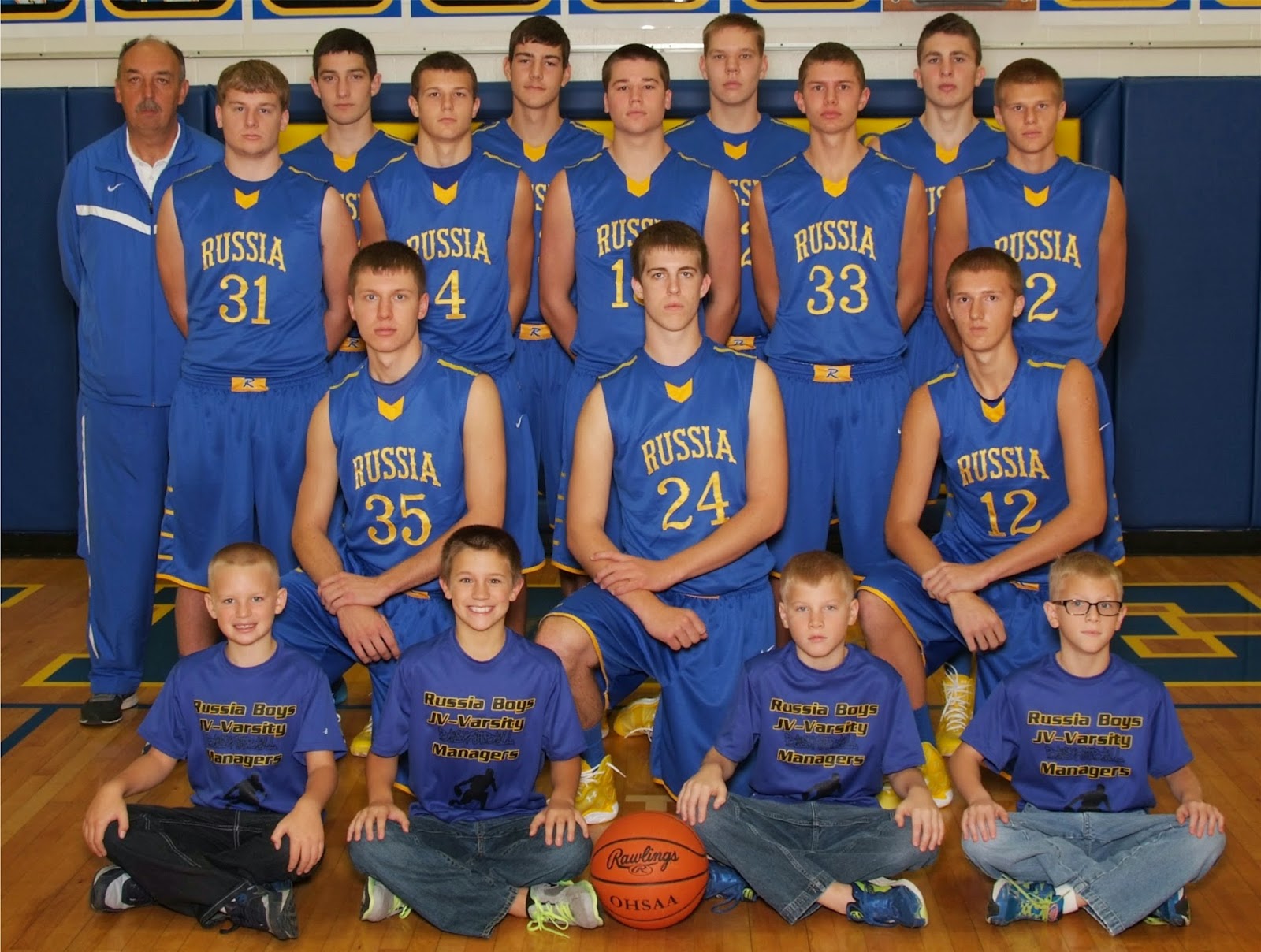 It's funny how one interesting sports story can lead to the next sometimes... I ran into Russia High School basketball fan and former player Henry Cordonnier at the Russia Library this past Saturday. Henry played for the Raiders over 40 years ago and asked my opinion on the current boys basketball team. He wondered if I thought the 2014-2015 team would be remembered with some of the great Russia teams from the past. With this season just a little more than half over, I told Henry time will tell, but I was only familiar with a few of the great Raider teams in recent history.

Henry then proceeded to tell me about an average, but spirited, Russia team he played for in the 1970-1971 season. He said the big rivalry game was Ft. Loramie, just as it is now. Only back then, Henry stated, the fans were even more passionate than today. When the two schools played it wasn't unusual to see Russia fans chewing on heads of cabbage and Ft. Loramie fans carrying into the game all sorts of toy frogs. Both shenanigans in reference to the heritage of their rival opponent. Henry recalled how Ft. Loramie's biggest star was a multi-talented athlete named Randy Schafer (who would later become my high school baseball coach) and Russia countered with a balanced attack in their starting five. In the first of two match-ups that season, the Redskins beat the Raiders on a buzzer beater and afterwards Russia was anxious for revenge at their final meeting played on Russia's home court in Versailles at the time. The second game lived up to the hype as the Raiders sealed a victory with a couple Don Cordonnier free throws in the closing seconds and Ft. Loramie missed a shot at the horn. Russia finished the season just 7-12 overall and 4-8 in the league, but that Ft. Loramie win will always be remembered because it was the Redskins only league loss that year. Henry's tale was an interesting one and I enjoyed hearing a little sports history about a rivalry that still runs strong today. 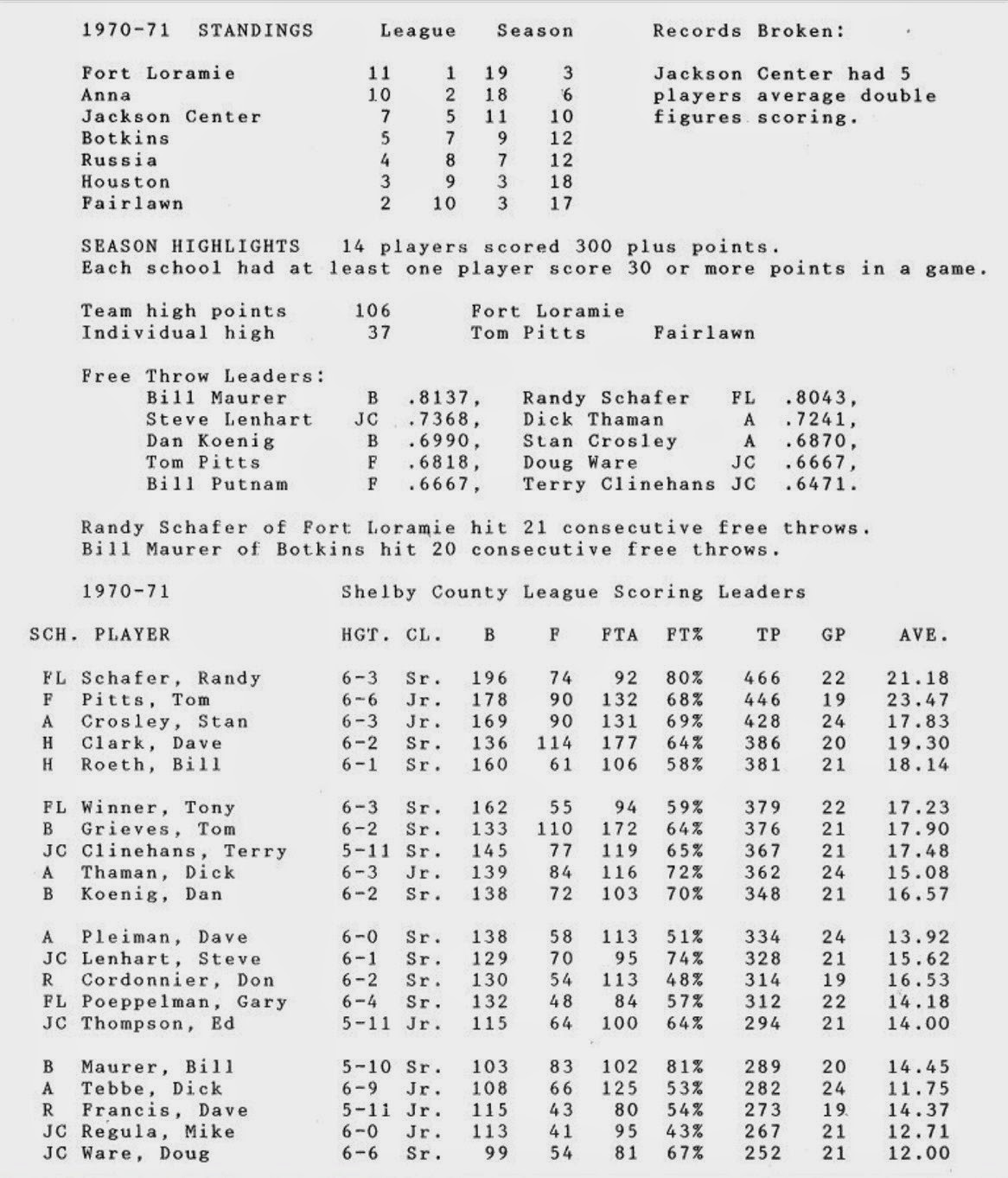 Stay with me now as I fast forward a couple days later to Monday... I received an email from my mother in Florida in response to Chicago Cubs great Ernie Banks passing away just last Friday. The email included a picture from a newspaper clipping back in 1975 and showed Ernie with some free throw contest winners in Piqua. One of the kids in the picture is a guy named Tony Bornhorst. Tony is a Piqua native and a friend of my parents who graduated high school from Sidney Lehman Catholic and has since enjoyed a lengthy high school basketball coaching career. Tony is also very involved as a basketball camp director for NBA players and Olympians all over the country. Mom couldn't remember, but wondered if Tony was part of the great Lehman team that beat a great Ft. Loramie team back when the Cavaliers and Redskins played at Troy's Hobart Arena. Wait, what? She wasn't positive on the time period, but it was obviously prior to any recollection I had since I was born in 1971. I emailed my mom back and asked her to verify the year and what level of tournament game this was, since it was played in Troy as she stated. 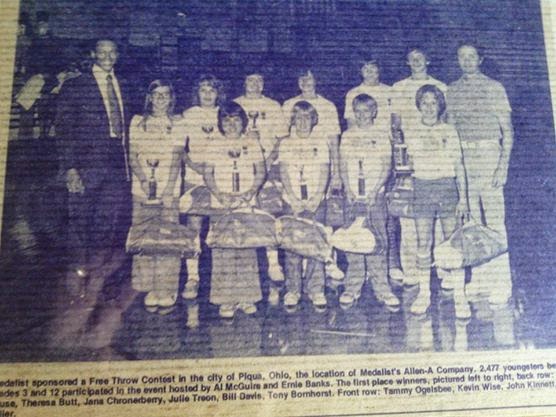 Hall of Famer Ernie Banks on the left and Tony Bornhorst
is the tall guy in the back row standing next to a basketball
coach named Al McGuire... yes, that Al McGuire

The next day, Tuesday, mom replied to my email. She contacted Tony and he told her he remembered that game at Hobart Arena, but he was still in school in 1975 and the game took place several years beforehand during the 1970-1971 season. Tony recalled how Lehman and Ft. Loramie were both state-ranked either #1 or #2 in the AP and UPI polls. John Kremer was the Redskins coach and his two biggest stars were Randy Schafer and teammate Tony Winner. The game between the two schools was not a tournament game, rather a regular season match-up that was suppose to be played in Ft. Loramie. Lehman asked if the game could be moved to Hobart since it was expected to be quite a battle. The Redskins did not provide the competition that was expected despite having a tall and talented team and Lehman won easily. The loss frustrated Ft. Loramie fans for many years afterward. My story doesn't end there folks...

One Fish Report reader that I frequently email back and forth is Ft. Loramie alum Dave Boerger. Dave is a retired executive with Ford Motor Company that lives in Michigan, but stays in touch with life back home through the Fish Report website. Dave enjoys local history, as I do, and from time-to-time he will share stories with me. Dave is also a high school classmate of my mother. Here was my opportunity to share a story with Dave, so I forwarded him the email correspondence between mom, Tony and myself. Dave replied almost immediately on Tuesday and said my mom has a good memory! The year was indeed 1971 and he attended that game between Ft. Loramie and Lehman at Hobart Arena. Dave said the attendance was a sell-out and unfortunately the poor performance by the Redskins was really disappointing. Ft. Loramie finished the 1970-1971 season with an impressive overall record of 19-3, but it was unsatisfying to many fans. They lost the Lehman game and later an early tournament game. Oh, and one more game, that one against Russia that started this whole tale. It's funny how one interesting sports story can lead to the next sometimes!

*Follow up note - Shortly after writing this story I ran into Russia's Don Cordonnier and Don verified a lot of the facts above. However, he did add one more fact that may sting some Ft. Loramie fans 44 years later. Remember those game winning free throws Don made to beat the Redskins? Don said when he got fouled by the Ft. Loramie player he was barely touched! 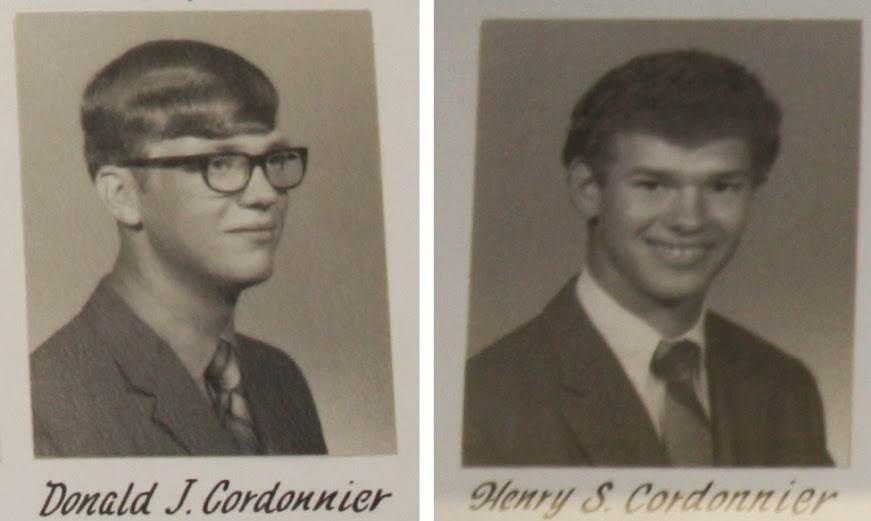 Don and Henry Cordonnier were senior classmates in 1971

Notes and quotes from Flyin' To The Hoop

This was my second straight year attending the #2-ranked basketball showcase event in America called Flyin' To The Hoop at Kettering Fairmont's Trent Arena. I came for the Saturday games starting at 10:00 am, took an extended lunch break in the middle of the day, and stayed until the last game was almost finished around 10:00 pm. Below are a few of my notes and quotes from the day...

Russia basketball fans are the best
Among Saturday's lineup of powerhouse schools that came from other states, there was a list of Ohio schools that included Tri-Village, Centerville, Thurgood Marshall, Franklin, Cincinnati Aiken, and several from the Columbus area. The smallest school, D-IV Russia, beat them all in fan support. Granted, it was the Raiders first time in the prestigious showcase, but it was enough to make event founder and president Eric Horstman smile. I talked to Eric before the 10:00 am Russia game and indeed he was smiling. As he gazed at the crowd he said "I had no idea. Thanks for making me look like a genius." 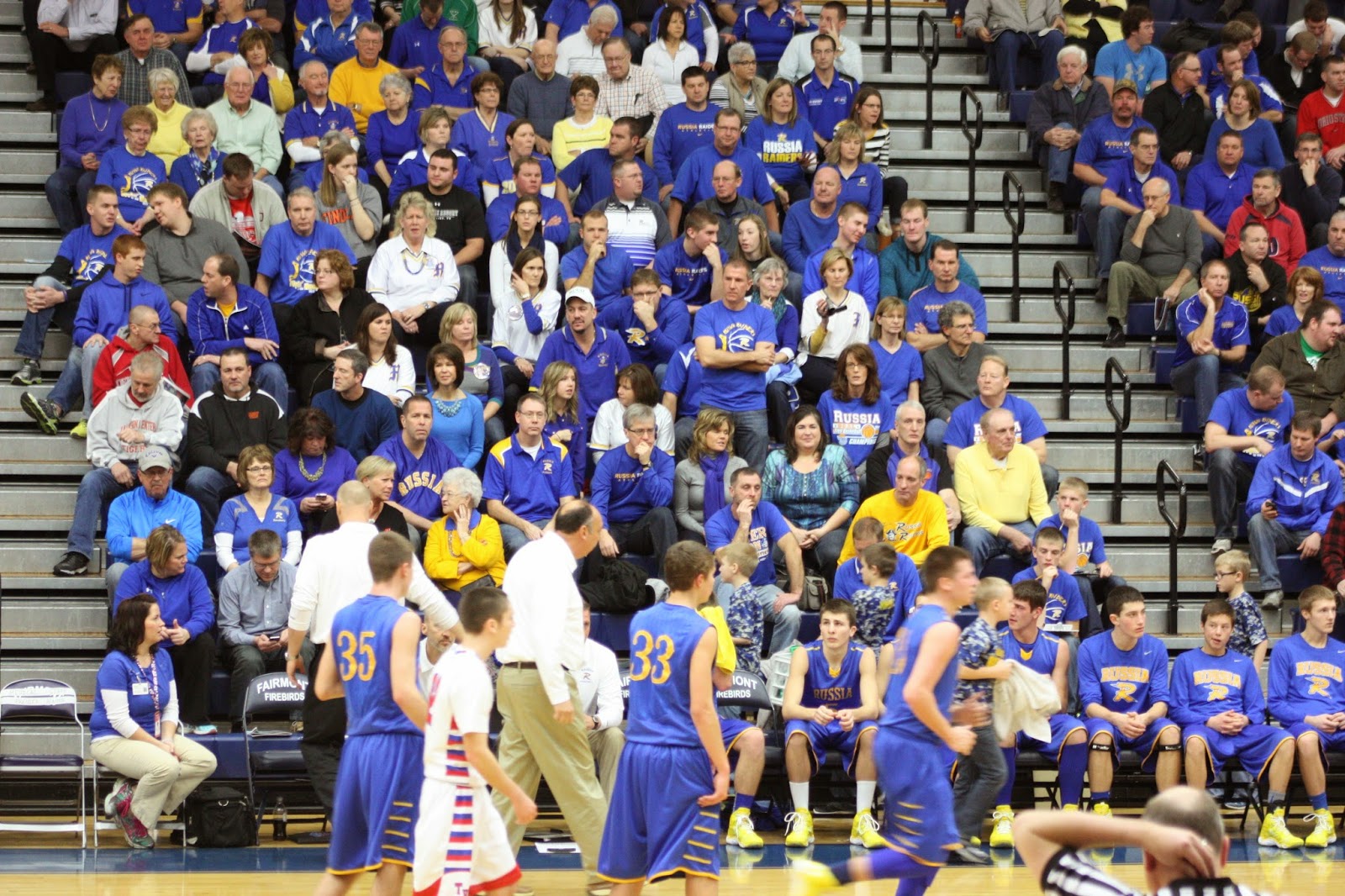 One Flyin' To The Hoop veteran told me "last year nobody came for the
10am game." This year Russia filled the stands from top to bottom!

Tri-Village knows how to win
They're not flashy. All Tri-Village does is find a way to win. I'll admit, I had a tough time believing in this team last year when they finished the regular season 20-1. I thought they played in a weak conference and would go down in tournament to the mighty SCAL or MAC. Then I covered their games as they walloped Ft. Loramie, a loaded Troy Christian team, and Marion Local to advance to the state tournament. This year the Patriots made their debut at Flyin' To The Hoop with an 11-0 record and ranked #2 in the latest AP state poll. I told myself again, they play in a weak conference and aren't really that good. Then I watched Saturday as they beat undefeated and #3-ranked Russia 56-49. Tri-Village played the best defense I've seen all season. They also have two horses named Cook and Linkous with an outstanding point guard in VanWinkle. I spoke to a half dozen Russia fans afterwards who said "if (fill in the blank) would have happened we could have won." They were exactly right. However, Tri-Village found a way to win. 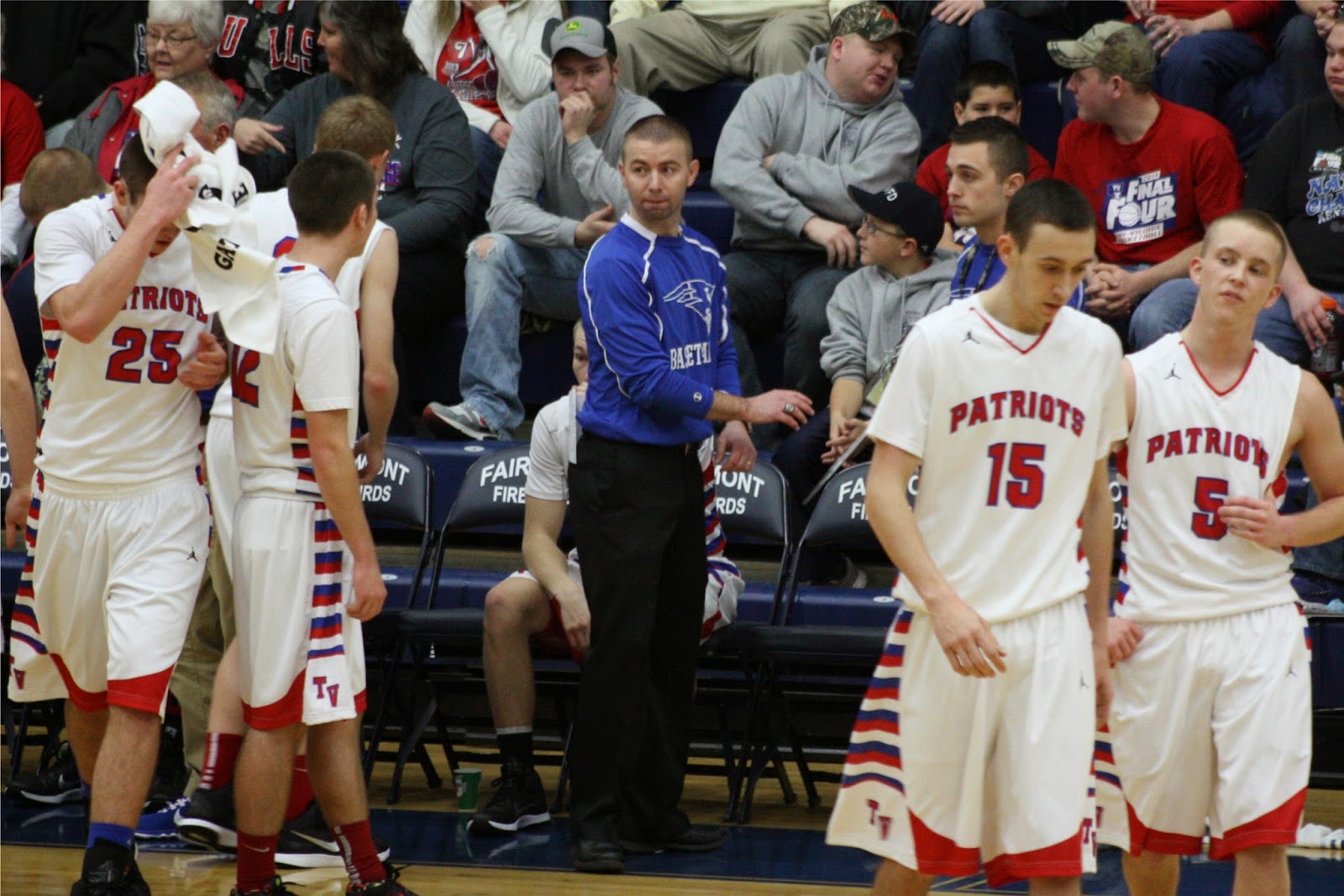 Josh Sagester's teams have 84 victories in the past 3-1/2 seasons.
The only thing they haven't won yet is a state championship!

The pre-game dunk show is ridiculous
Pre-game dunking during warm-ups isn't allowed during the regular season, but it's allowed at Flyin' To The Hoop. It's ridiculous (and that's not slang meaning it's cool). I'll estimate I saw 40-50 players trying to draw attention to themselves with pre-game dunks. I'd probably cringe if I knew how much time they actually spent practicing these dunks back home. How many of them dunked on Saturday in games? Very few. So, you can dribble from half court with nobody guarding you and slam dunk. How about just draining the five foot bunny shot from the baseline when you're being guarded and your team needs two. That will get a bigger roar.

Best game of the day
The main event was the last game of the day at 8:30 pm, but the best game of the day tipped right before that at 6:45 pm as Prolific Prep (CA) took on La Lumiere (IN). The #1-ranked junior in the country named Josh Jackson, who holds offers from Ohio State, Louisville, Michigan State and Kansas, plays for Prolific Prep and it was clear from warm-ups he was athletic (back to that pre-game dunk show thing again). Josh showcased his talents with 26 hard-earned points. However, La Lumiere countered with an equally talented senior guard named Jalen Coleman who already signed with Illinois. Jalen wasn't as flashy as Josh, but he lead his team with 30 points, including a 3-pointer to send the game into overtime. La Lumiere pulled out the exciting win in the end 71-69.

The Luke Kennard show
It was obvious that a majority of the standing-room-only crowd was there to see Franklin High School superstar and future Duke Blue Devil, Luke Kennard. As one guy put it, "I've never seen as much Duke stuff as any single school today at Flyin' To The Hoop." The last game of the day pitted Franklin against Montrose Christian (MD), the high school of last years NBA MVP Kevin Durant. After Montrose Christian fouled Luke twice before he could even set up Franklin's offense on their first possession, it was pretty clear the Mustangs plan was to harass Luke the whole game. In the end Luke went to the charity stripe 40 times and converted 34 free throws, breaking a 41-year old OHSAA record of 28 made free throws. He also finished with 47 points in the 77-75 win to pass Jerry Lucas and Bob Huggins for 10th place on Ohio's all-time career scoring list. 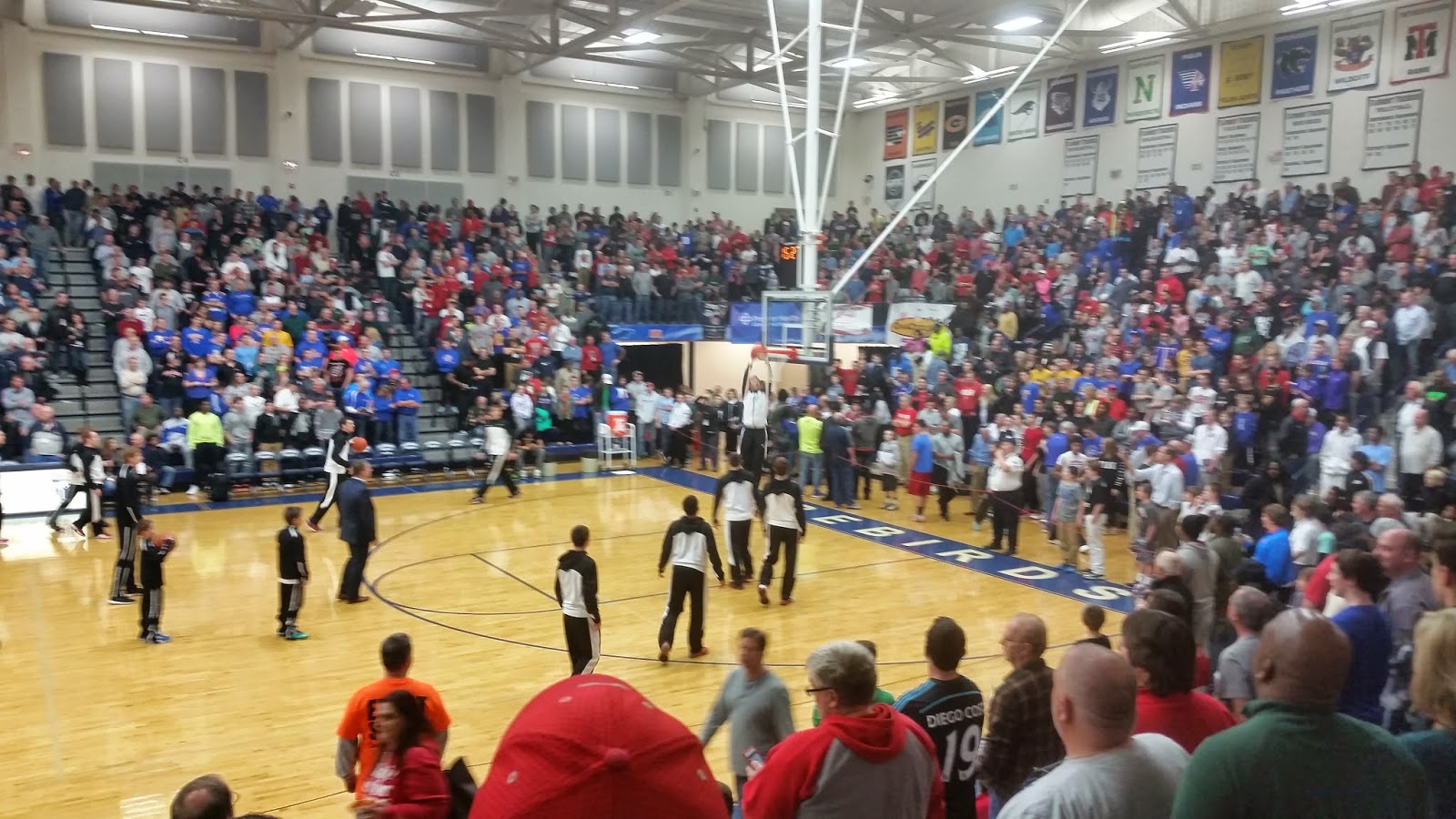 A sold out crowd filled up Trent Arena to see Luke Kennard.
Someone even mimicked online ticket sales and sold fake tickets!

Final notes
It simply doesn't get any better for a Saturday of basketball than Flyin' To The Hoop at Trent Arena. Tickets are affordable, every seat is great and I'm entertained all day. I bought my ticket online for $26.31 and had a reserved seat with a back in the 7th row at half court. By comparison, I could have skipped Flyin' To The Hoop, went across town to UD Arena and paid $26.90 from Ticketmaster for a reserved seat with a back in the 400 level to watch the Flyers play Saint Louis. No thanks, I'd rather watch Luke Kennard and the best high school players in the nation... even if I have to put up with their pre-game dunk show!