The best of the week in sports...

What a fun time of year if you're a high school basketball fan in this area. Tournament madness is here for most schools, post season awards are coming out, and milestone achievements seem to be taking place in bunches. Here's the best of what happened this week in my eyes...

Redskins do it again

The post season All-SCAL awards were released on Wednesday and once again the Ft. Loramie Redskins were honored with the girls Player of the Year. Junior Jessica Boerger was the top vote-getter among county coaches, following in the footsteps of her cousin Darian Rose who was the co-player of the year in 2014 and outright player of the year in 2013. While past performance doesn't guarantee future results, it would appear Jessica is the logical front-runner for next year's top award. Just don't tell that to Fairlawn super sophomore Audrey Francis, the only other underclassman on the 1st-team roster. I thought every girl on the all-county list was deserving of recognition, but the one omission that stuck out for me was Russia senior Claudia Monnin. Claudia missed most of her junior year due to ACL surgery and bounced back this season in a big way. Her best game may have been the 18 points she scored at Fairlawn to lead the Lady Raiders in a key league win back in early January. The good news for Russia fans is Claudia is still playing tournament ball...and maybe her best is yet to come!

Claudia draining a 3-pointer against Ft. Loramie early this season

All-MAC is almost right
The All-MAC girls awards were announced the same day as the All-SCAL and Marion Local super senior Allie Thobe was honored with Player of the Year. The MAC got it right it my opinion. Allie was the best player in that tough conference and very deserving of the award from everything I heard. I'm not sure who came in second, but I thought if anyone might challenge Allie it could be another senior, Meg Reineke of New Knoxville. When the Lady Rangers hosted Russia earlier this season I listened to the game on radio as Meg carried the Lady Rangers to an overtime victory over my Raiders almost single-handedly. Speaking of seniors stars, the only injustice I saw in the voting was Coldwater senior Sarah Kanney slipping to 2nd-team. How can a 1000 point scorer not be one of the top 12 girls in the conference? Sarah responded on Wednesday night like she always does...she lead her team to a tournament victory with 20 points! 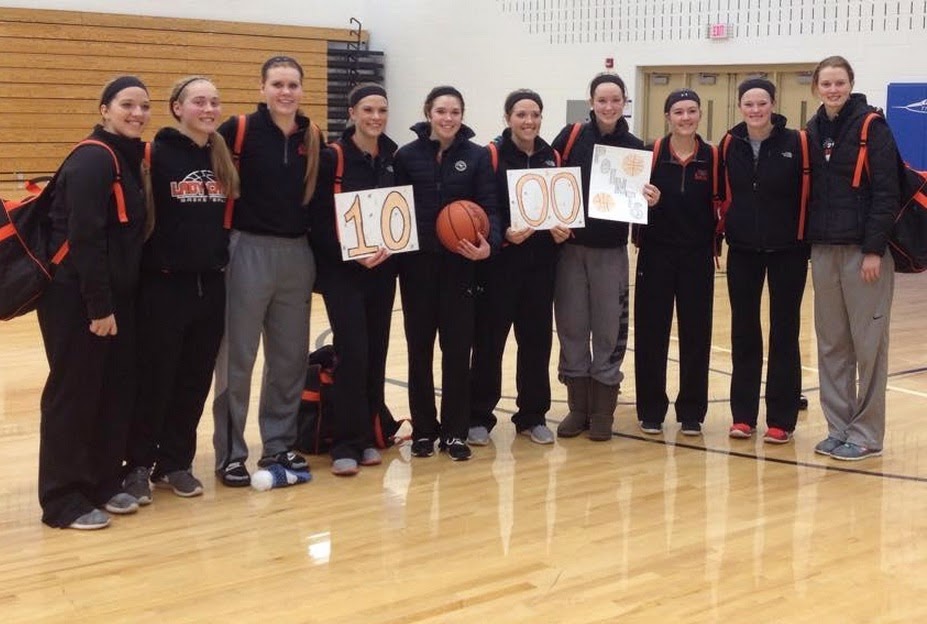 Sarah is just one of two MAC girls to reach 1000 points so
far this year. The other is Player of the Year, Allie Thobe.
Meg Reineke is currently at 970 heading into tournament.

Newton girls easy to root for
Do you know who this year's Newton girls basketball team reminds me of? It's their Cross County Conference foe from last year, the Bradford Lady Railroaders. Newton extended their school record win total to 22 on Wednesday night with a tournament victory over Dayton Christian. The Lady Indians will now play for their first sectional title in school history this Saturday against Southeastern.  Last year Bradford also set a school record for total victories with 20 and went on to win their first sectional title in school history before losing to Ft. Loramie in the district tournament. Both seasons seem kind of magical considering their programs overall history and it makes them easy to root for. I jumped on the Bradford bandwagon last year and I'm on the Newton bandwagon this year...for now at least!

300 wins for Coach Lee
Minster boys basketball coach Mike Lee racked up his 300th career victory on Thursday night with a 71-39 win over Bradford. He's coached the Wildcats for 22 seasons now and always ran a first-class program in my opinion. Before this week I had never met Coach Lee, but always respected him from afar. I had the pleasure of interviewing Mike on Fish Report LIVE! this week and my opinion of him was confirmed. While the interview only lasted five minutes, I could have easily talked to him for 30 minutes. When asked to name a couple memorable games over the last 22 years, Coach Lee eluded to his first game against former Marion Local coach Jack Albers, a big regional tournament victory over Jackson Center, and his 2005 state team. Minster, like many MAC schools, has a lot of things to be proud of...and a boys basketball coach with 300 victories is one of them!

Another 1000 point club inductee
It was just a couple weeks ago when Russia added a new 1000 point scorer to their record books with senior Kylie Wilson. Kylie became the 7th girl in school history and the first since Anita Bulcher in 2005 to join the 1000 point club for the Raiders. This Friday Russia should have another inductee. Kylie's classmate Nolan Francis is 14 points from the milestone and should no doubt hit the mark as his #1-seed Raiders open tournament play. When Nolan scores his 1000th he will become the 6th boy at Russia to do it and the first since Brent Pleiman in 2006. Quite an accomplishment considering all the factors that go into scoring 1000 points. Raider fans will want to savor this rare moment in boys basketball history...with the log jam of talent they currently have, it may be a while before it happens again!

Nolan driving in for two of his 20 points against St. Henry 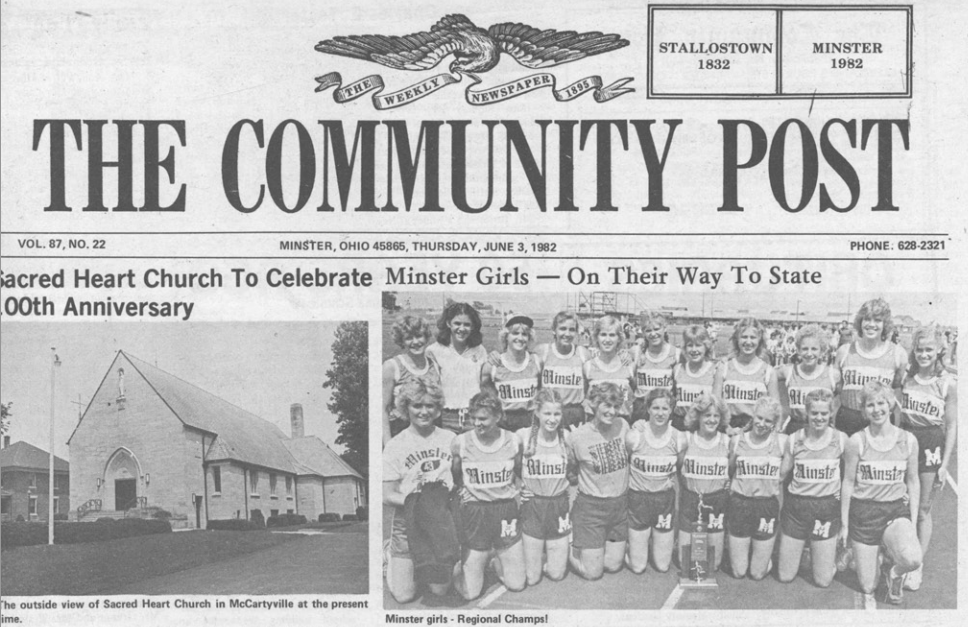 I don't have a Facebook account. Never have. My wife does. And about once a week I'll get on the family iPad (whenever I can find it) and tap the Facebook app to see what I've been missing. Mostly what I see are pictures. Pictures from birthday parties, anniversaries, sports pictures, etc. Not real news per se, rather limited details about small town stuff. Before I know it I've spent a half hour scrolling through Facebook. It reminds me of what I depended on for this type of "news" 30 years ago. Before Facebook. It was called The Community Post.

The Community Post is still being published today. Right there in downtown Minster. I haven't picked up the actual paper since I was a kid. But, as teenager in the 80's, I always looked forward to stopping at my grandparents house between Ft. Loramie and Minster to read their subscription. I didn't have much interest in world events or national news at that time. Heck, I didn't even care what was happening in Sidney. The Community Post was perfect for me because it had all local stuff and something that was hard to find in those days... lots and lots of pictures. 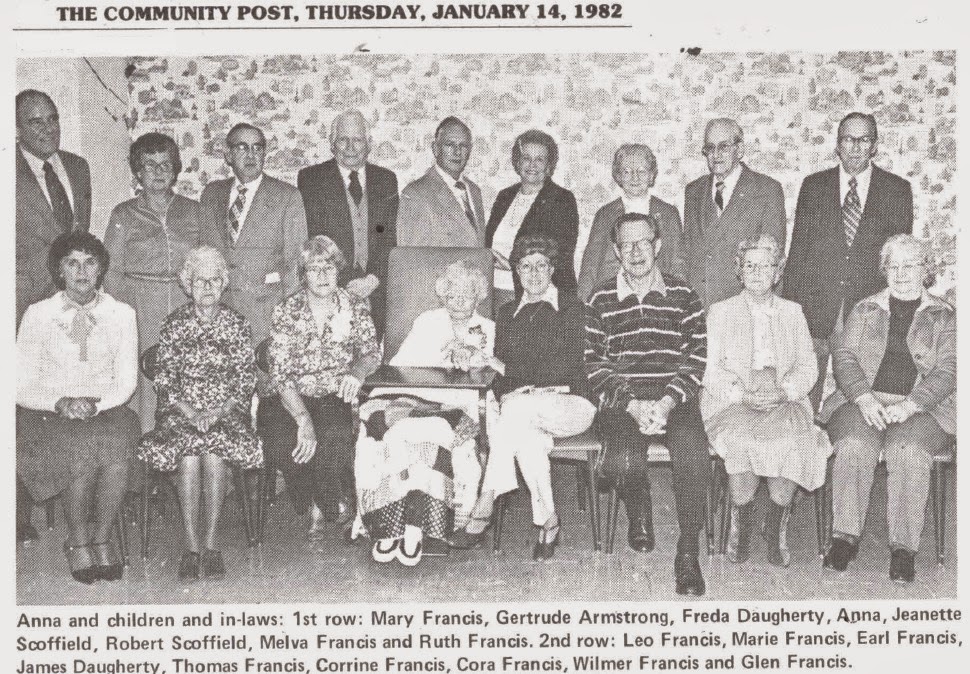 You could always find pictures of birthday parties in The Community
Post. Here's one from the 100th birthday of Russia's Anna Francis

Think about it. These days folks use their smart phone in a second to snap pictures from a high school reunion or a family Christmas party. In a few more seconds they'll have the pictures posted on Facebook. 30 years ago? The only time I saw pictures like that is when I read The Community Post. The late great photographer and editor, Dick Bensman, buzzed all over the area to capture these events. And always in short sleeves I might add! What we do today in seconds took Dick hours of work, no doubt. 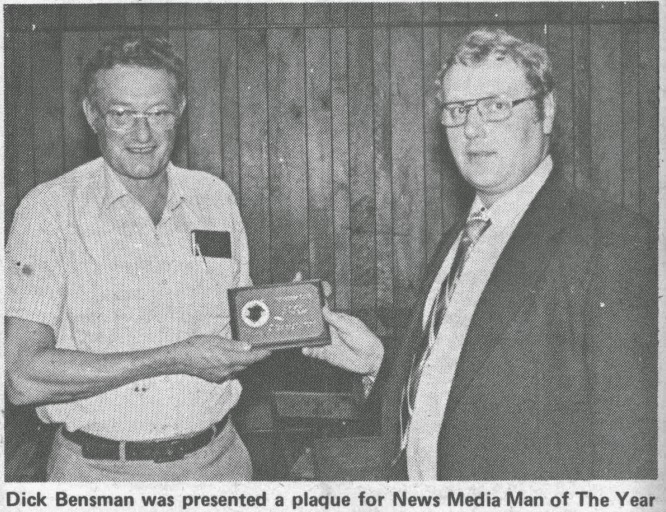 As the 80's passed I grew up and moved away. My grandparents passed away. I became more interested in world events and national news. The internet was born and a little later Facebook came along. I thought my days of reading The Community Post were over. That is, until I discovered the Minster Historical Society website. They have archived copies of The Community Post all the way back to the 1800's. I've been taking trips down memory lane recently, reading papers from the late 70's and early 80's. Every paper takes me about a half hour to scroll through... just like Facebook. 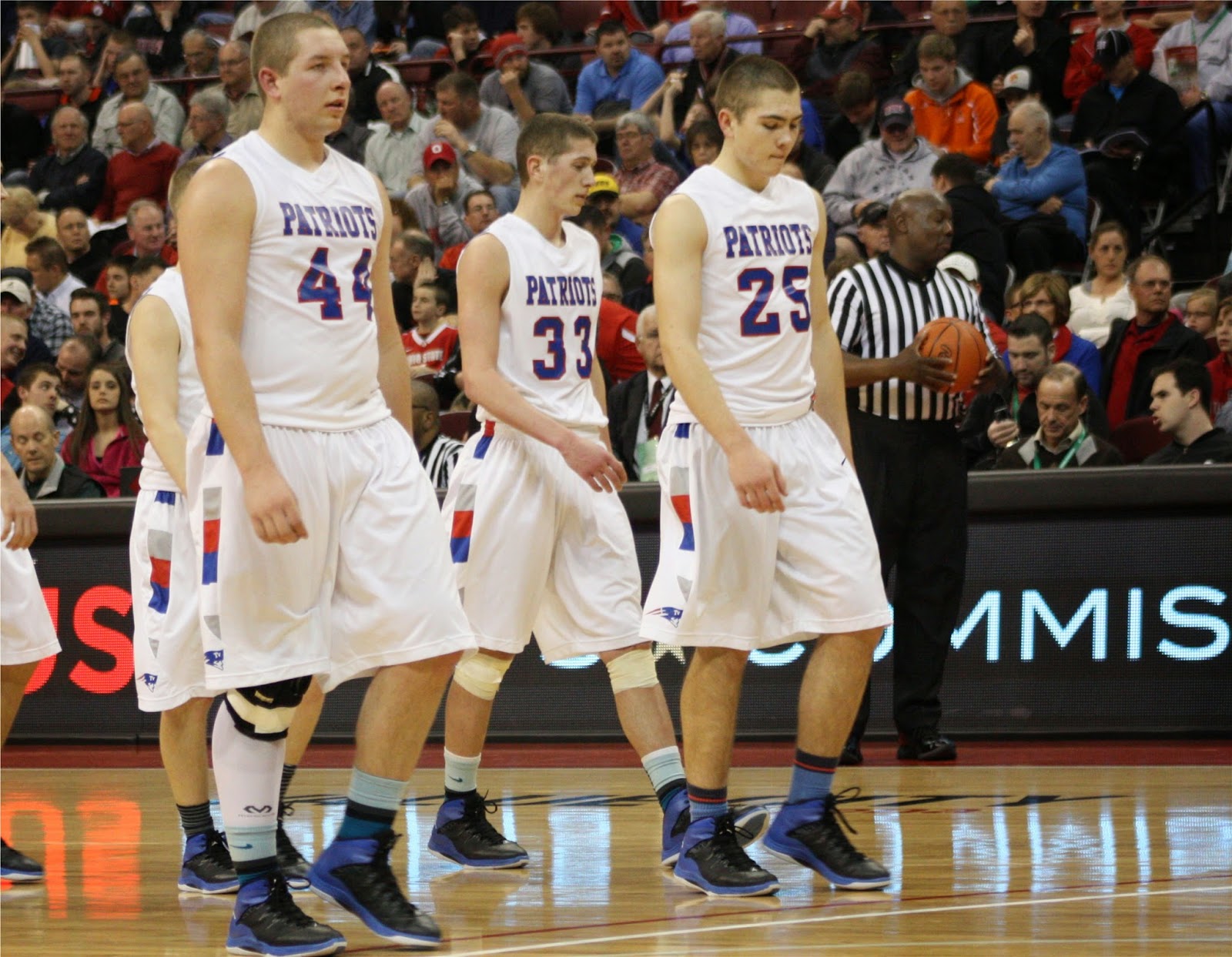 In 2014 Tri-Village made it to state on the shoulders of Tyler Cook, Colton Linkous
and Damion Cook. This year Tyler is gone and the Patriots are playing even better

The Tri-Village boys are having another remarkable season and are currently sitting at 18-0. However, anytime I seem to mention the Patriots to basketball fans from the area it's not uncommon to get the response, "yea, but they don't play anybody." My reply to that has always been, "they're playing the same teams they did last year before beating Ft. Loramie, Troy Christian and Marion Local on their way to the state tournament." This year's team even beat my Russia Raiders back in mid-January, so you won't hear me saying anything about their strength of schedule.

Last year though, Tri-Village won a little differently. The Patriots utilized a 6'-6" 245 pound senior that scored over 1,000 points in his career by the name of Tyler Cook. This year the bulk of scoring is done by Tyler's cousin, Damion Cook, and teammate Colton Linkous. And when I say the bulk of scoring, I'm not exaggerating. In the Patriots latest win over Bethel this past Tuesday, Damion scored 27 points and Colton scored 25. The team finished with 59 on the scoreboard, meaning the dynamic duo accounted for 88% of the total.

You know what that victory over Bethel reminded me of? Another dynamic duo that starred at Bethel back in 2000-2001. The Bees were led that season by a couple guards named Matt Witt and Matt Plunkett. I recall how both boys could shoot like crazy and Matt Witt went on to eventually star at Eastern Kentucky and later play professionally overseas for about ten years. From what I remember, those two carried Bethel all year long. The Bees finished that season with a record of 23-4 and I was in the Schottenstein Center to watch them win a state semi game against Reedsville Eastern. The following day the Bees won it all with a 79-53 shellacking of Delphos St. John's. 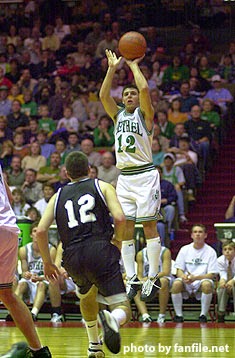 Consider this... Matt Witt averaged 25 points per game that season, Matt Plunkett 20. This year both Damion Cook and Colton Linkous average just over 20 points per game. Back in 2001 Bethel knocked off #1 state-ranked Marion Local in the regional finals. This year Tri-Village is the #1 team in Ohio and would it surprise you if they had to get by Marion Local on their way to Columbus again? Ironically though, the key to Bethel winning the state title game that year wasn't Matt Witt and Matt Plunkett. It was a little-known player that averaged 7 points per game named Shawn Zink. Shawn played the game of his life in the most important moment of the season and led all scorers with 24 points. Could Tri-Village win an eventual championship on just the shoulders of Damion Cook and Colton Linkous? Perhaps. But, having a player like Shawn Zink on your team never hurts either! 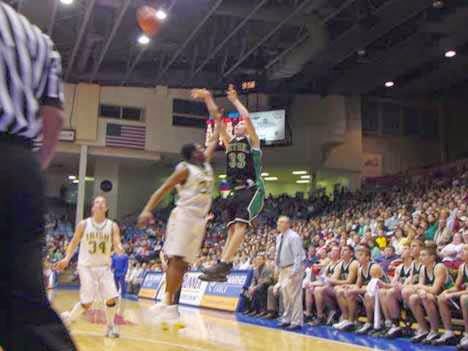