The Independence Day holiday weekend is a significant date on the calendar for a lot of people in the area. It means Liberty Days is being celebrated over in Ft. Loramie, it means folks in Russia are finalizing details for their annual Raider Classic baseball tournament, it means local country music fans are packing up gear for Country Concert, and it's the unofficial middle of summer vacation for all the kiddos heading back to school in the fall.

No doubt most of us will be celebrating this weekend in some kind of way. I'll actually be flying to South Carolina on July 4th to join my family already vacationing in Myrtle Beach. All this leisure activity is thanks to the brave men and women in our U.S. military. Their service and sacrifice means we get to enjoy the holiday doing what we want. Without them I don't imagine we would be having picnics, playing baseball, going to concerts, and laying on the beach. At least I don't see those kinds of pictures in countries that aren't free. It's easy to forget and often times I do.

Fortunately, my 8-year son Ross didn't forget a couple weeks ago. He asked if he could write a letter to his buddy in the Marines, Bryce Dues, who just graduated from Russia High School this past May. Ross and Bryce became friends during high school basketball season when Bryce played for Russia and Ross was the water boy. Although Bryce just left for the Marines a short time ago, it has to be a stressful time for any new recruit, and Ross wanted to let Bryce know he's thinking about him back home. 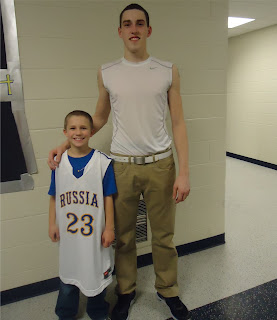 Ross left for his Myrtle Beach vacation this past Sunday and the next day a reply letter came in the mail from his buddy. I didn't tell Ross about it yet, I sure won't open it, and I'll be bringing it to him in Myrtle Beach on July 4th. I'm positive he'll be surprised. Not many people get gifts on Independence Day, but a letter from a U.S. Marine on the 4th of July is about as special as it gets. Thanks Ross for reminding me how lucky we are to enjoy this holiday and thanks to all the service men and women who keep giving it to us. 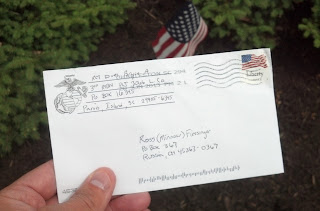 Even in the day of emails and texting, nothing beats a letter