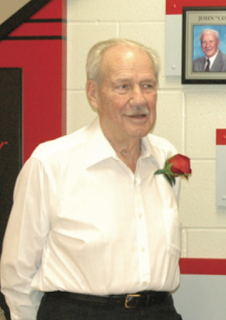 With the high school basketball season beginning, the memories of my old coach John Kremer always come to the forefront. He celebrated his 90th birthday earlier this year, and in 2009, was an inaugural inductee into the Ft. Loramie Wall of Honor. The photo of Coach at the induction ceremony is shown. On the occasion of his 90th birthday, I sent him a card and a brief note of thanks, which has been excerpted below:

Congratulations and happy birthday on reaching the wonderful milestone of 90 years. The news about your upcoming birthday sure brought back many wonderful memories about Ft. Loramie sports and your many contributions that made those recollections so special.

For example, Ft. Loramie’s basketball program was said to have started in 1935; however, I recall my dad telling abut playing other teams from around the area in about 1930. They played in the upper level of Brucken’s Café and those initial games eventually led to the creation of Ft. Loramie’s basketball program, the Shelby County League and the construction of the gym as part of the now-demo’ed old high school building. After a recent meal at Brucken’s, my brother and I, along with our sons, climbed up to the Brucken’s upper level to see the setting for ourselves and to share the story with our sons. There were a lot of cracker box gyms prevalent back in the day, but upstairs at Brucken’s literally takes the cake!

Playing basketball for you in 1964-66 was really something special. You molded me, a tall, skinny, clumsy kid, into a decent basketball player. I recall you giving me a pair of weighted shoe inserts and ankle straps for use during the offseason, and you challenged me to be the first player from Loramie to dunk the ball. It worked! I could easily dunk during warm-ups, but the only opportunity I had during a game once was on a breakaway, but lo and behold I travelled!! The weights also helped my rebounding in that I held the school record for a number of years.  However, that too is imperfect, as years later, a fellow player, who as a benchwarmer kept the statistics, told me that he gave me a rebound every time I touched the ball from a missed shot, whether I controlled the rebound or not. Needless to say, I was glad when my flawed record was finally broken years later.

Enjoy your special day, as the tributes coming your way are so deserved. Thank you for everything you’ve done on behalf of all Loramie High grads over the course of your storied career. 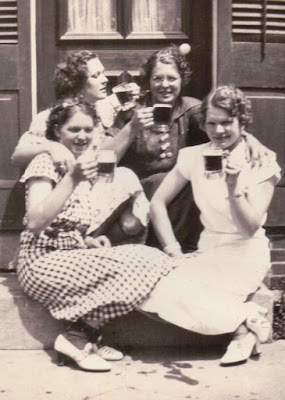 After Last week's blog on Veteran’s Day honoring those who served in WWII, a relative emailed me the following photo taken just at the end of the war in 1945 of my mother and her three sisters. Recall from last week’s blog that their younger brothers had all served in the war, consequently during that time, my mother and her sisters helped their dad with all the farm work. Once the war was over, they could get back to enjoying life again, as is so obvious in the photo. They were representative of so many who contributed on the home front to support the war effort. As a further tribute, here’s a video of 2,097 Rosie the Riveters who set a Guinness world record recently, as well as this article about several Rosie the Riveters taking a plane ride in one of the bombers they had built some 70 years earlier. The sacrifices made by this generation for our freedom and way of life are so exemplary that their efforts should never be forgotten.
No comments: 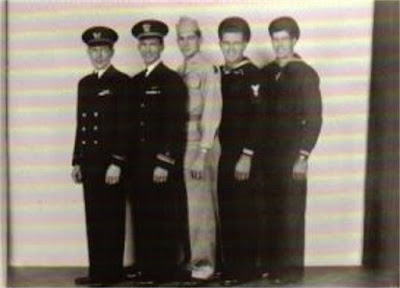 The US flag was always prominently displayed while growing up, and in 1959, the number of stars on the flag grew from 48 to 50 as Alaska and Hawaii became states. To celebrate the occasion, my mom made a cake in the shape of the new flag with 50 blueberries as the stars and red raspberries as the stripes, and white icing background. Now my wife makes the same cake every year on the 4th of July. We have a flag pole on our yard and am proud to fly the flag year around. And this tribute to our flag recently arrived in my email inbox from a friend that inspired the idea for this blog entry on Veterans Day.

Because my grandfather passed away at age 52 right before WWII, my dad received an agricultural deferment to farm the 220 acres making up two family farms; my grandfather’s and my great grandfather’s. However, his 5 younger brothers all went into the service, as did my Mom’s brothers (shown in the photo). My uncles contributed in various ways to the Allied victory, including a medic at D-Day, a naval mapping expert on President Truman’s staff, an honor guard at the Tomb of the Unknown Solder, a Navy Pilot, and an officer on the destroyer USS Yosemite during the Pacific campaign. Fortunately, all survived the war after serving valiantly, ended up getting married and having a bunch of kids (I have 75 cousins!). Although Dad didn’t serve, he helped provide the food and supplies so necessary for the victory.

One other important aspect of my Dad not serving during the war came about when he would drive his sisters and their neighborhood friends to and from the local dances at Lindhaus Park every weekend. It just so happened that one of those neighborhood girls became my mother-in-law 30 years later! Fortunately that connection gained me quick acceptance to the family, otherwise who knows what might have happened, as my garb and hair at the time were very hippy-like! There’s no doubt in my mind those living during the WWII era represent the Greatest Generation, and the veterans especially accomplished amazing triumphs for which they are being gratefully honored today. 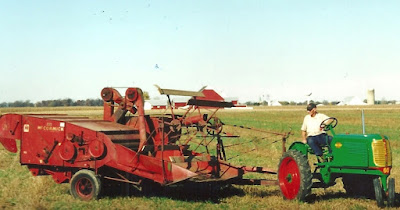 My Dad’s 102nd birthday would have been on October 29th. Before Dad's passing at age 94 in 2008, our clan would annually reconvened on the home farm that had been in the family for generations to celebrate his birthday, plus before his retirement to recognize the conclusion of a successful harvest season. One year, we surprised Dad with a restored Oliver tractor shown in the photo that was just like the one he used as a young farmer. Dad was in his prime again on that memorable fall day, especially as we all took turns riding with him on the tractor. The combine in the photo is Dad's 70 year old McCormick harvester that he donated to the owner of the tractor for eventual restoration.

So Dad's 102nd birthday means he was born in 1913, which happened to be the year of a big flood in the area. With Lake Loramie, Miami-Erie canal and the confluence of several creeks in the town, history has it that the entire area was severely flooded during the spring before my Dad was born, which no doubt delayed the preparations for the plantings that year. My Dad used to tell about a discovery he made while plowing one spring on the family farm when he was 14 or 15 years old. It was a button made of bone so he cleaned it up and brought it to his Dad, my grandfather. The button brought a huge smile to my grandfather’s face as he recalled the button was likely from his Dad’s (my great grandfather's) long underwear. Apparently in those days, my great grandfather would put on a pair of long-johns in the fall and never take them off until spring. And usually it was while plowing as the weather started to warm when my grandfather would stop the horses, remove his overalls right in the middle of the field, literally strip off the well-worn long underwear and throw them in the furrow to be plowed under, never to be seen again (except for the button). And that further perhaps explains why all the children of my great grandparents were born in the Dec/Jan timeframe nine months after the spring plowing, as great grandmother would likely have nothing to do with my great grandfather until those dreadful long-johns were plowed under and he had his annual bath! 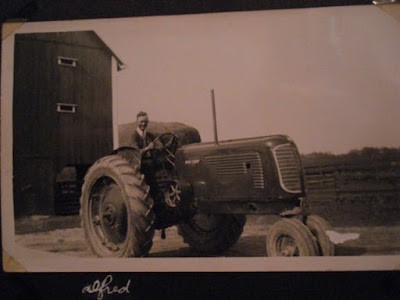 This is the original Oliver tractor