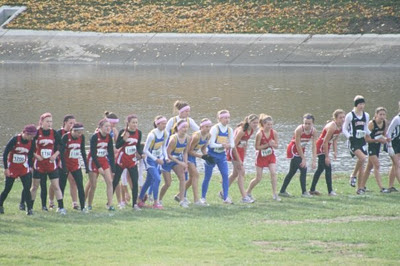 It's the most wonderful time of the year...  No, I'm not ready for Christmas yet.  I'm talking about the cool fall air and enjoying my annual trip to Troy this Saturday to watch the OHSAA D-III Southwest Regional Cross Country Meet.  I've probably attended this event 14 out of the last 15 years.  That means this Saturday will make 15 of 16.  For me, I can't think of another regional tournament sporting event I look forward to more.  I'll take it over football, basketball and baseball.  This puts me in the minority I imagine, but allow me to explain my reasons:

For starters, the regional cross country meet in Troy is traditionally, without a doubt, the best of the four regionals in Ohio.  I won't waste time arguing which schools are better than others, but I will point out that the Minster girls program holds the state cross country championship record with nine titles, including last years.  Guess which regional they're running in this weekend?  That's a rhetorical question of course.  The biggest reason I get a kick out of this event is what's on the line for all these kids...kids that live on my street, kids whose parents I went to school with, and kids that enjoy the same sport I do.  The boys race will have 16 teams plus 21 individual qualifiers for a total of 133 kids from 31 schools.  The girls race will have 16 teams plus 18 individual qualifiers for a total of 130 runners from 31 schools.  Every kid realizes what's on the line and you can bet every kid will be giving absolutely everything they've got trying to make it to the State Meet the following week.  The top four teams and those individuals that finish in the top 16 advance to Hebron. It's truly inspirational to watch so many working so hard.  The Troy race also has a reputation for showcasing eventual state champions. Last year both the girls state champ, Tammy Berger from Versailles, and the boys state champ, Colin Cotton from Country Day, also won in Troy.  By the way, Tammy is back again this Saturday to run her last Troy regional.  I'll personally be pulling for the Russia Raiders girls and boys teams to make a return trip to the State Meet after both making it last year.  It's a remarkable spectacle with the best talent in the state and that's why I keep coming back every year.
No comments: 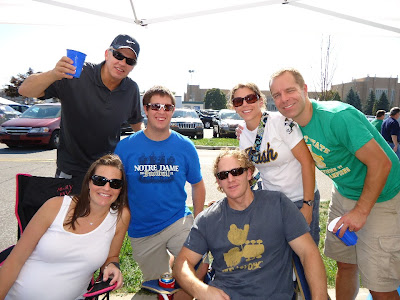 We departed Russia, Ohio at 6:30am.  That time is typically when I leave for my Saturday morning run, so being wide awake when the trip started was no problem.  Kick off was scheduled for 3:30pm, which was explained to me later is the normal starting time for Notre Dame games because of their TV agreement with NBC.  The 3+ hour drive from Russia, including a coffee stop at the Villa Nova in St. Mary's, wasn't bad with a van full of people to talk to.  Arriving in the city of South Bend didn't give me any indication that it's home to one of the most prestigious schools in America.  Heading to our parking spot was surprisingly easy, although we did arrive plenty early which probably helped.  From our parking spot in the sea of tailgate parties just getting started, I couldn't help but notice Notre Dame Stadium and the Joyce Center basketball arena, as they were the two biggest buildings in sight.  There was plenty of time to tailgate, so before we even set up we were scheduled to take a tour of campus.  Fortunately for us, the guy that spearheaded the whole trip and drove us to the game was also our tour guide.  It also helps that he's the father of a current Notre Dame student and has given this tour several times before.  Walking into campus was awesome.  I've never considered myself a Notre Dame sports fan, but for a Midwest guy that grew up aware of the history and tradition, it was cool to finally see everything I'd heard about.  Touchdown Jesus, the Golden Dome, Sacred Heart Basilica, the Grotto.  The beautiful fall day made everything picturesque and almost made the football game we were about to see seem secondary.  As we ended our campus tour and walked back to start our tailgate party, we passed the famous Notre Dame restaurant/pub called Legends, which seemed to be especially crowded on game day.  The tailgate parties at Notre Dame are like most other college campuses, the smell of brats and burgers filled the air along with some footballs getting tossed across the parking lot.  There was a particularly cool moment when the Irish football team was escorted right by us on some big tour buses.  You couldn't see the players, but I assume they were in there.  It was time to pack up our camp and head to the game.

Our seats were in section 133, which is an upper level, corner endzone view.  It was the perfect seat for watching what seemed like a couple hundred Notre Dame students do push-ups after every Notre Dame touchdown over Air Force.  Here are some other observations from the game:  The stealth bomber that flew overhead at the conclusion of the national anthem was the best flyover I've ever seen in person.  I love how there is very little sideline room on the field, making it feel like the crowd is right there in the action.  There were only two small scoreboards on each end of the stadium with no video screens or TV's for replays, bummer.  The Notre Dame band is really good, so good they were presented with the Sudler Award that day which is considered the Heisman trophy for college bands.  Finally, the stadium was unquestionably the easiest to navigate of any stadium I've ever been in.  It has two levels and it's round, simple as that.

The Notre Dame experience is definitely worth adding to your bucket list.  If possible, pick a nice fall day and allow yourself enough time to tour the campus!
No comments: 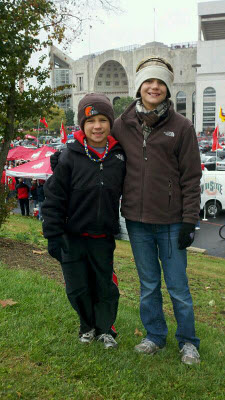 I traveled to Columbus this past weekend for the Ohio State - Michigan State football game and brought along with me my wife, 11-year old daughter and 7-year old son.  For my son this was his second regular season Buckeyes game in the past two years and for my daughter her first.  The game resulted in 10-7 loss and Ohio State didn't play particularly well on offense.  There was a somber mood at Ohio Stadium and I actually heard a media expert later that day predicting the Buckeyes first losing season since 1988.  When I asked my kids if they had a good time, I was a little surprised when they both smiled wide and said yes.  I'm not positive they knew what the final score was and I don't think they really cared.  In their eyes it seemed to be a great day.  Their game day experience started with hot dogs and pop at a tailgate party of an old high school friend of mine.  When game time came they enjoyed cheering the team as they rushed onto the field and watching the huge American flag raised for the national anthem by some servicemen.  During the game they had fun trying to find where Brutus Buckeye was at in the stadium, doing the wave and chanting O-H-I-O with the crowd.  They were also especially thrilled when the OSU band did Script Ohio and made a special appearance in our section 12B to get the crowd fired up.  When the score was 10-0 and the game seemed to be out of reach for the Buckeyes midway in the 4th quarter, I suggested we head for the exits.  My son got this panicked look on his face and quickly asked why?  I realized at that time what a memorable moment he was having and agreed to stick around for another series of plays.  It was obvious he didn't care about the score, he just didn't want his Buckeye's experience to end.  As I drove the family home that night I realized what a good time I had also. I'm hopeful there will come a day when my kids start bringing me to games, whether it's at Ohio State or somewhere else.  And I'm positive when they get frustrated with their team and suggest we leave a little early I'm going to ask them the same question they asked me, why?
No comments: