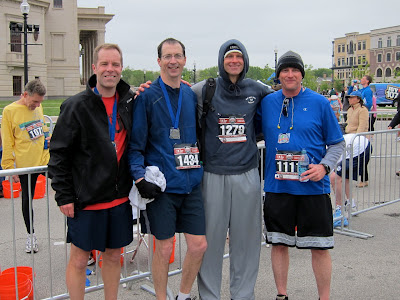 Me and my running buddies in Carmel

I took my first trip to Carmel, Indiana this past weekend.  Carmel is just north of Indianapolis and was hosting their annual Carmel Marathon & Half Marathon on Saturday.  Our group included three of my running buddies and our wives.  The ladies left early Friday morning and decided to do a little shopping before the guys left Friday afternoon and met up with them later.  Carmel is a little under two hours from Russia, Ohio and one of the guys compared it to driving to the east side of Columbus, Ohio.

Carmel is a beautiful city.  Most cities will have a good part of town and a bad part of town, I didn't see a bad part of town in Carmel.  The homes are nice, it's very clean, and the people are friendly.  We stayed at the SpringHill Suites and I commented to a hotel worker how manicured the city was for our race that weekend.  He replied humbly that it's always that way.  We ran the half marathon which was a 13.1 tour of the Carmel that took us through residential areas, past local businesses, onto the Monon trail, and ended in their cute downtown.   It was a neat way to experience all the city has to offer.  We also tried out some eateries over the weekend.  We ate a pre-race meal at the Kona Grill in the Clay Terrace outdoor shopping mall, a post-race lunch at the Stacked Pickle, pizza on Saturday night at Bazbeaux's, and late night drinks at the Detour Grille listening to the band Chicken Bone.  The food and atmosphere everywhere was excellent.  I also have to mention that one of my Fish Report Twitter followers tweeted me on my way over to Carmel that I should enjoy the world famous roundabouts.  I wasn't quite sure what a roundabout was, but I definitely understood after arriving.  You will too if you ever go to Carmel.

I wouldn't exactly call Carmel, Indiana a vacation destination, but if you're looking for some good shopping, good food, and neat city, it's worth a weekend stay. 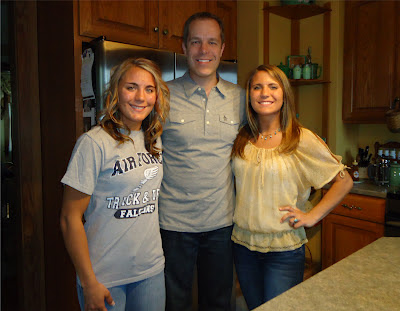 One thing is for sure at Waynesfield-Goshen High School in eastern Auglaize County.  As long as the Tigers boys or girls track & field team has the name Horn on it, they're bound to be pretty good.  Take a quick look at the school record book and you'll find the Horn name on 9 of 17 boys events and 7 of 17 girls events.  The most recent Horn's that have made their mark in W-G track & field are senior twin sisters Ivy and Morgan.  Fish Report was lucky enough to meet the girls recently and find out just how special they are.

I originally saw the Horn sisters almost two years ago and it wasn't on the track.  Instead, I was in attendance at their church as they received the sacrament of Confirmation along side my nephew.  At the time I had never heard of Ivy or Morgan, but I remember my sister whispering to me that they were really good runners.  Little did I know how good they would become and how much their faith would influence the sport they love.  Fast forward two years to this past weekend, and I was now being invited into their home by their wonderful parents Jon & Kitt and sitting in the kitchen with Ivy and Morgan.  Prior to arriving I had asked if I could bring my 11-year old daughter, who is an aspiring runner herself.  The response I received was they would love to meet her.  I figured it might be an inspirational experience for everyone.

After explaining to the sisters what exactly Fish Report was, one of the first questions I asked was when they developed their love for track & field.  Ivy and Morgan explained that their grandpa Joe Horn, who is a track legend at W-G and still assists with coaching, was a big motivation.  Grandpa Joe was the founder of the Ohio Blue Thunder Track Club and both girls were running the 100 competitively as early as five years old.  Grandpa Joe is responsible for quite a legacy, a legacy with more accomplishments than space I have on this blog.  Here are a few highlights:  His son Jon (Ivy and Morgan's dad) is the 9th all-time best indoor high jumper at Air Force Academy.  His grandson Gray (Ivy and Morgan's brother), now a senior at the University of Florida, is currently one of the top Olympic candidates in the heptathlon.  Another son Jay (Ivy and Morgan's uncle) also ran at Air Force Academy.  And grandson Joe, who is Jay's son (Ivy and Morgan's cousin), won four events for W-G in the 2006 D-III State Track & Field Meet and was part of the only team state championship in W-G history.  To say that Ivy and Morgan have strong bloodlines would be quite an understatement. 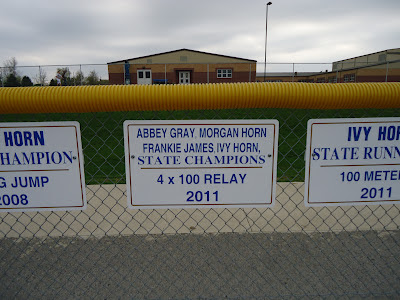 Last year's 2011 D-III State Track & Field Meet was a day the girls will never forget.  For starters, the sisters together collected their first-ever state championship medals on the 4x100 relay team.  Ivy also earned a 2nd place finish in 100 and a 3rd place finish in the 200.  The only event she didn't score in was the 100 hurdles when she was leading her heat in prelims, but kicked the 5th hurdle and didn't qualify for finals. Morgan tied for 9th in the pole vault and missed qualifying for finals in the 100 by less than 3/10ths of a second.  Their performances that day helped the W-G team finish 5th in the final standings.  Looking forward to this year's state meet on June 1st & 2nd, the girls have the highest hopes.  Ivy and Morgan would both like to compete in four events. Add to that a really good sophomore thrower at W-G who made it to the regional meet last year in both the shot put and discus, and the Tigers could score a lot of points.  One thing is for sure, if the girls team wants to match the lone state championship the boys team won back in 2006, this year is the year.

After high school graduation Ivy and Morgan will be heading in opposite directions, literally.  Morgan is following family tradition and continuing her education and track career at Air Force Academy in Colorado Springs where she will compete primarily in pole vault.  She explained the academy is not your typical college and she won't get much of a summer break after high school graduation as she already leaves on June 28th for basic training.  It's also worth noting that over 15,000 apply to the academy every year and only about 1,000 get in.  Ivy will be taking her talents to The Ohio State University in Columbus where she has been recruited for the same competition her brother Gray excels at, the heptathlon.  For those wondering what the heptathlon is, it's a seven event competition consisting of the 100 hurdles, high jump, shot put, 200, long jump, javelin and the 800.  Ivy's path is of particular interest to me since she will be joining several other track stars from the area that I have watched compete at the high school level.  She will soon be teammates with current Buckeye freshmen Katie Borchers of Russia and Janel Olberding of Ft. Loramie.  Also joining the team will be incoming freshman Tammy Berger of Versailles.  Ivy acknowledged being recruited by warm-weather SEC schools like Auburn and Alabama, but said her goal is to win championships and felt her best chance to do that is with the Ohio State team.  I asked the sisters how they felt about separating from one another considering they've had such a unique bond of being both twins and track stars together.  Both admitted it was going to be a big life change, but they were also excited about their futures.  In this age of technology, text messaging, Twitter and FaceTime will help with the long distance separation.

Coming into this interview I was aware the girls shared a deep faith in God.  I knew this from seeing a previous television interview with Ivy, and my sister informed me that their dad Jon would soon be the new pastor of the church I watched them make their Confirmation in almost two years ago.  The girls both told me they prayed hard about their college decisions and agreed they trust God in everything they do.  Ivy said her favorite bible verse is First Corinthians 10:31, "whatever you do, do it all for the glory of God" and Morgan stated they both feel they wouldn't be the athletes they are without their faith.  Fittingly, one of their favorite activities outside of track has been going on mission trips to Haiti the last couple of years.

Finally, I couldn't leave without getting some bit of advice for my 11-year old daughter sitting there with me.  I asked Ivy and Morgan why they excel at what they do.  I wanted something we could take back to Russia and work on in the years to come.  Without hesitation the girls said they feel they've succeeded because of hard work and attitude.  Hard work that begins in the weight room and means lifting four days per week.  And an attitude that includes loving what you do, having fun and never giving up.  The sisters have a motto, "You get better or worse every day. What did you do today?"  It's not uncommon to hear them yelling that motto in practice at each other and they said it's what really gets them going.  I know one thing, after listening to them talk, their infectious personalities could get anyone going and they now have a couple new fans from Russia.  It's not hard to see why Ivy and Morgan will be winners on the track in the years to come.  More importantly though, it's easy to see why they will be winners off the track for the rest of their lives. 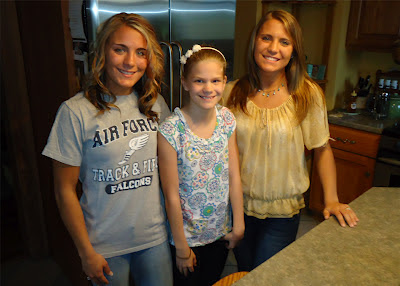