Giving all they got... 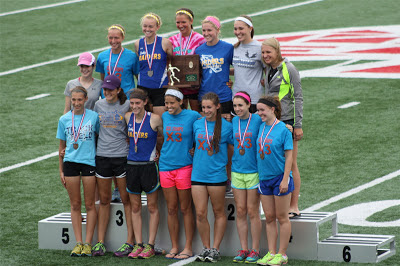 There's a saying in sports I've heard before that usually comes up around tournament time that goes "All It Takes Is All You Got".  That slogan came to mind this past Saturday at the D-III Regional Track & Field Meet in Piqua when the Russia Lady Raiders brought home the first girls regional championship in any sport in school history.  You see, when you have a track team the size that Russia does, it really does take all you got to pull off something this big.

That's why Russia sophomore Leah Francis couldn't celebrate long after qualifying for state in the 100 hurdles and had to quickly get ready to score points in the 4x200 relay.  That's why Russia freshman Lauren Heaton, who just ran anchor on that 4x200 relay team, had problems a short time later picking herself up off the track when she won the 400 dash.  That's why senior Taylor Magoto's season best in the pole vault couldn't have came at a better time.  That's why sophomore Emily Borchers school record time in the 1600 was so huge (breaking her sister Katie's record).  And that's why senior Lauren Francis looked exhausted after qualifying for state in the 3200.  Every point from every girl was hard-earned and in the end only four points separated Russia and Minster.  By the way, that's the same Minster program that has won 12 state championships in girls track & field. Don't get me wrong, the Russia victory didn't shock the world.  As a matter of fact, one coach I talked to said she knew the Raiders had a good shot to win.  Even last year Russia finished a very respectable 3rd at the regional behind Versailles and Minster.  But to explain what the Lady Raiders were up against coming into this weekend I'll use some baseball terminology, the girls needed to play error-free and hit a few out of the park.  They did exactly that.  Congrats to Coach Phelan, her staff, and her athletes on making history.  The girls were outstanding representing their school, they brought home some new hardware to Russia, and all it took was all they had! 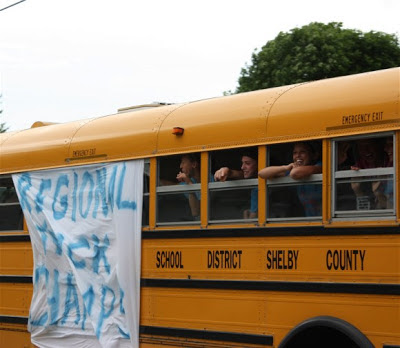 The Lady Raiders gave Russia a reason to be proud