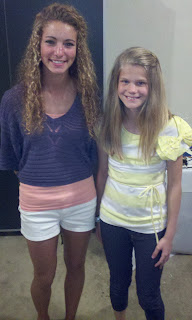 Versailles senior Tammy Berger has been a hard one to run down.  Whether it's been on the track or on the cross country course, high school runners have been trying to catch Tammy for the last four years without much success.  Among her many victories are a couple of individual state cross country titles, two individual state track titles in the 3200 meter run, one individual state track title in the 4 x 800 meter relay, and one team state championship in track.  And she's not quite finished yet.  This weekend Tammy is competing at the State Track & Field Meet at Jesse Owens Stadium in Columbus.  She will be running with her teammates in the 4 x 800 meter relay on Friday, and then the individual 1600 meter and 800 meter runs on Saturday.  For high school fans it will be the last chance to see one of the truly dominant distance runners from our area.  For Ohio State fans it will be a preview of the newest Buckeye joining their team after this weekend.

If you've ever watched Tammy run or met her personally, it doesn't take much to figure out she's talented, focused, humble and quick to credit any personal accomplishments as the result of her team.  Those qualities have made her an elite athlete at Versailles High School and are bound to bring her success at The Ohio State University.  The perfect example of these qualities came just a couple Saturdays ago in the district meet at Graham High School.  I was in attendance that day and watched Tammy win the 1600 meter run, breaking a district record she already held, with a 5:03.59.  Her next race was the 800 meter run, which marked just the second time she was racing the 800 in a competitive setting.  Tammy finished in second place that race, one second behind super talented 800 runner Brittany Bailey from Botkins, and both qualified for the regional meet.  Tammy's final scheduled event at the district meet was the 3200 meter run and she was the two-time defending state champ in that race.  Tammy scratched (didn't run) the 3200 that afternoon and the everyone in the stadium was buzzing why?  I heard several people speculate the heat of the day got to her and questioned why she would attempt running the three longest events.  A newspaper article the next day explained it all.  Tammy wanted a new challenge.  She had already succeeded in the 3200 in the past, twice as a matter of fact.  She now wanted to succeed in the 1600 and 800 before her career at Versailles was over.  Tammy also predicted that choosing not to run the 3200 at the district meet might give her teammate Natalie Grillot a shot at qualifying in the 3200 for the regional and state meets, which would help the Versailles team.  That prediction worked to perfection as Natalie grabbed the last spot in the 3200 that day and made it to the regional meet. 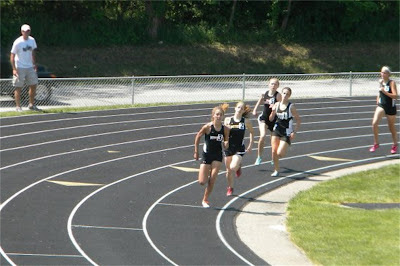 Fast forward to the regional meet in Troy this past Friday.  Tammy won the 1600 again which qualified her for the state meet.  Next came the very competitive 800 meter run.  Some wondered how this new challenge was going to work out.  As the race progressed and the runners came around to their last turn, what unfolded next was personally my favorite moment of the night.  Tammy was on the heels of Brittany Bailey in Lane 1 and made her move to pass.  What seemed like out of nowhere, flying up next to them came Meg Westerheide from Ft. Loramie.  The three girls were running three wide down the front stretch in front of a cheering crowd and giving everything they had for the finish line. Crossing first in 2:14.06 was Tammy, followed by Meg in 2:14.78, and third was Brittany in 2:15.76 (You can watch the video here).  All three qualified for the state meet, setting up another great race in Columbus this Saturday.  Tammy also removed any doubts about her decision to run the 800 as she not only won the race, but teammate Natalie Grillot once again grabbed the last qualifying spot for the state meet in the 3200 meter run later that day.  That gutsy call at the district meet paid off big-time and the Versailles girls team brought home the D-III regional championship trophy that night.

With the state meet upon us this weekend I won't make any predictions about the results.  All the events have the best talent in Ohio, anything can happen, and the finishes are often decided by 100ths of a second.  However, I am predicting that Tammy will make her Tigers team and community proud.  She's been a pleasure to watch for the last four years, and she will be missed on the track and the cross country course next season.  Do yourself a favor and make the trip to Jesse Owens Stadium this Saturday for an exciting day of races.  After all, it's your last chance to catch Versailles' Tammy Berger. 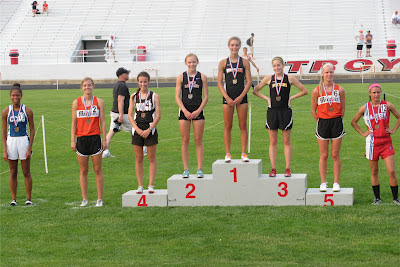 #1 Tammy Berger, #2 Meg Westerheide and #3 Brittany Bailey
put on a quite a show in the Troy regional 800 meter run